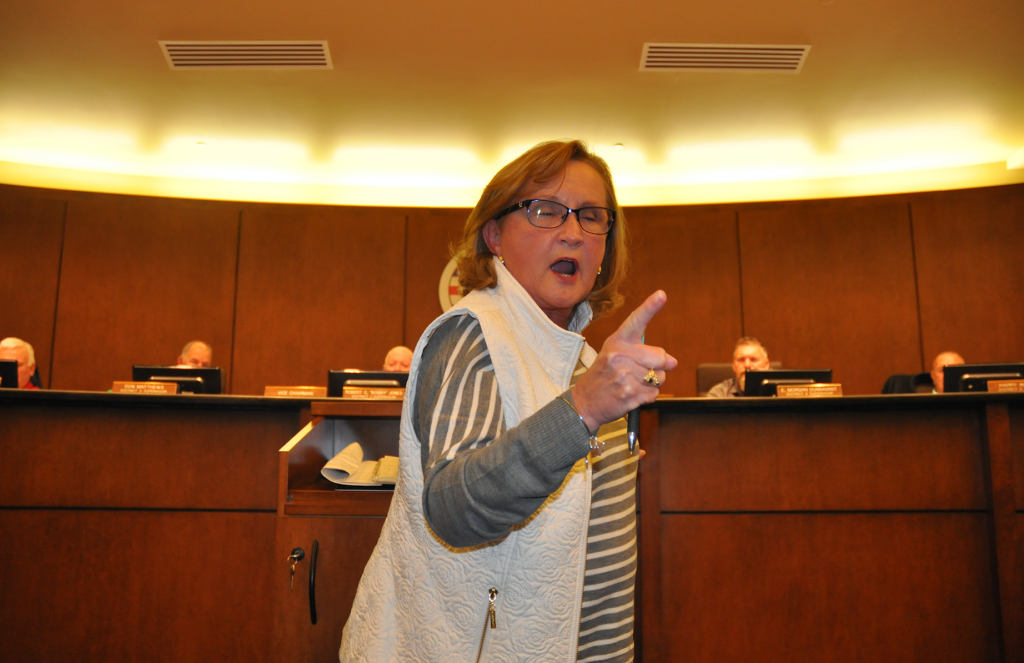 JORDAN MILES | HERALD Pipeline opponent Annie Lou Parr gave an emotional testimony to the board of supervisors Thursday, urging them to deny the needed permit to construct the compressor station.

The 5-0-2 decision came at exactly 11 p.m. after 76 people spoke during a public hearing on the permit application. Seven of the 76 spoke in favor of the permit, while the remainder opposed the measure.

Ninety-five people signed up to speak at the five-hour-long hearing, with at least six law enforcement officers on hand in the County Administration Complex. 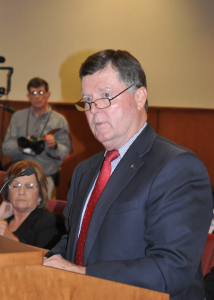 According to Dominion External Affairs Manager Carla Picard, the compressor station will be “one of the best stations in the system,” saying there are 109 compressor stations in six states that Dominion operates. She said the station would be “highly regulated” with “layers of additional vigor,” citing the conditions placed on the permit application.

Calling the intersection with Transco Pipeline “very important,” she cited a study where the residence closest to the station, with all four engines running, would only hear an increased sound of 2.9 decibels. The sound emitted from the station at the residence is below the 55 decibel federal limit.

Dominion is the energy firm leading ACP LLC, which is seeking federal approval of the 600-mile natural gas pipeline. If approved, the pipeline would begin in West Virginia, span Virginia and end in North Carolina. The pipeline would cross Buckingham, Cumberland and Prince Edward counties.

The compressor station is sited for a parcel of property along Route 56 between Shelton Store and Union Hill roads.

Evelyn Dent, who lives on Shelton Store Road near the site of the station, after reciting a poem “dedicated to public servants,” led opponents of the project to a verse of “We Shall Overcome,” which drew a number of voices singing loudly in unison in opposition to the project. 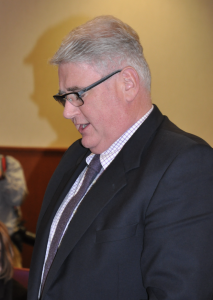 Those who spoke in opposition to the permit cited numerous negative effects from the compressor station, which is intended to move gas through the proposed pipeline. Many cited air emissions and pollutants, noise, devaluation of property, water pollution, the need for further study and the impact on overall health of those living near the station.

The compressor station would have “numerous impacts” on those living in the area, said Chad Oba, chair of Friends of Buckingham, a group opposed to the project. “They may be forced to (leave),” she said of those living in the Union Hill and Shelton Store Road neighborhoods. “Our land will be devalued.”

“I think they made the right decision,” said Aaron Ruby, a spokesman for Dominion, regarding the latenight decision.

“The planning commission failed,” said John Laury, who lives in the area of the station.

Dr. Lakshmi Fjord called the station a “deadly cocktail of highly volatile fracked gas,” while Dhyani Simonini, who lives in Yogaville, noted “mitigation means that there is something wrong here,” citing potential health effects from the station. 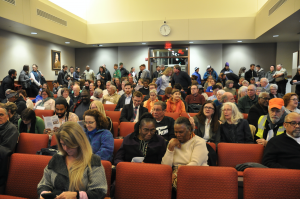 JORDAN MILES | HERALD
There was standing room only during the hearing, where over 90 people signed up to speak regarding issuance of a permit for a compressor station in Buckingham.

The permit was approved with 41 conditions, which address a wide variety of topics related to the station, including horsepower limits, emergency response, air quality studies and emissions tests, installation of fire breaks, a backup emergency communications system, compliance with the permit, staffing and use of silencers and noise. Conditions include a minimum of one employee, contractor or third-party security staffer be present onsite 24/7 during the first year of operation, installation of a backup system for monitoring communications and emergency notifications, a third party firm conducting air quality studies and emissions tests, development of a crisis response plan, the collapse of structures within subject property lines and grass or gravel fire breaks between the facility and adjacent properties.

According to Picard, environmental controls on the project include fugitive emissions reductions, reductions of carbon monoxide and volatile organic compound emissions and reductions of methane. Comparing the maximum hazardous air emissions to that of which are in Buckingham now, Picard said the displayed levels “were almost unattainable.”

According to her presentation, station blowdowns may only occur once every five years for testing or in case of an emergency. The station, she said, will have “full station silencers.”

According to Picard, the station and ACP would bring $8.7 million in tax revenue to the county in its first eight years of operation.

Many from outside of Buckingham spoke during the hearing. Speakers came from Nelson County, Richmond, Northern Virginia and other areas.

“We’ve had inconveniences to everything we’ve added to this county,” said John McWilliams, who spoke in support of the pipeline, citing job growth and tax revenues from the project, calling Dominion a “pretty good corporate neighbor.” Mark Schneider, who lives near the natural gas fired Dominion’s Bear Garden Power Station in New Canton, said while there was some noise associated with the project during construction, the noise now is “nothing.”

Doug Ange, who spoke in support of the station, said he’d worked with pipelines “all my life … We need some jobs. We just can’t keep sending our kids down the highway.”

“We’re disappointed,” Oba said following the hearing. “It’s pretty apparent it was a decision that wasn’t in favor of the people most severely impacted. And we really feel as if they took away their power to negotiate for stronger conditions … There was no need of doing this this evening.”

In late December, the Federal Energy Regulatory Commission (FERC), which has regulatory approval of the project, released its draft environmental impact statement (EIS) regarding the proposed pipeline, concluding the project’s impact would be “less than significant.”

During the latter part of the hearing, a short lived — but heated — dialogue began between Matthews and District Two Supervisor Donnie Bryan and the crowd. Matthews, verbally going district by district, asked those living in each district to raise their hands. Matthews and Bryan cited support from constituents for the station who hadn’t attended the hearings.

Bryan, who offered the motion to approve the permit, which was seconded by District One Supervisor R.C. “Bobby” Jones, said for at least one year, all board members have heard comments on the station. “The board has been part of a full and wide discussion of this matter,” Bryan said, noting supervisors had listened to citizens, read reports and seen presentations on the station. “Specifically, the board has heard and considered the impact of this special use on the character of the district, the impact of the special use permit on the welfare of the landowners and occupants of the land in the district and the impact on the economic development of this community and beyond.”

Bryan said he called county administrators and health departments in three localities in which other Dominion compressor stations are located. He asked about health effects, emergencies, complaints and concerns regarding the respective stations. “I’ve gotten responses from all three counties, and in speaking with these counties, I found no significant health issues related to the compressor stations in those three counties.”

District Four Supervisor Morgan Dunnavant said he looked “very hard” at conditions posed by commissioners, noting he recommended amendments that would give the conditions “more teeth in the enforcement.”

His amendments included ACP coordinating with the county for training needs for emergency services, shielded lighting at the site and incorporating new technology at the station as it becomes available.

The action comes as the county seeks control and access to a natural gas tap off of a lateral line from the proposed pipeline. Kyanite Mining Corp. — Buckingham’s fourth-largest employer — is set to enter into a memorandum of understanding (MOU) with Columbia Gas and ACP to acquire a tap, metering and a decompression station and construction of a lateral pipeline off of the ACP that will provide natural gas to Kyanite.

When the county learned of Kyanite’s agreement, resulting in the tap and access to the natural gas, the county was approached about the possibility of entering into a MOU with the firm “that would give the county the option to control approximately 200 acres through which this lateral pipeline would go,” County Attorney E.M. Wright told supervisors.

“God will hold you accountable,” said Pastor Paul Wilson, who preaches at Union Hill and Union Grove Baptist churches, which lie in the area of the proposed station. Before offering a “Biblical mandate” to the board, he said “Dominion is not God,” citing that supervisors, by voting in favor of the project, were violating the Ten Commandments. “Let there be no blood on your hands,” Wilson said.