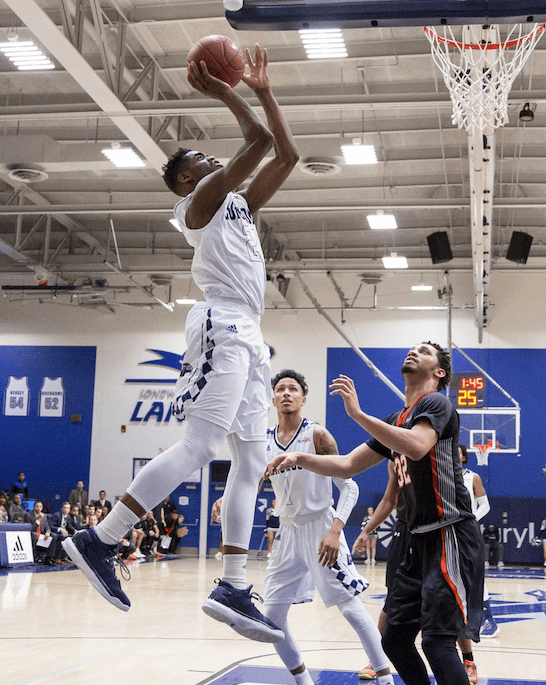 LONGWOOD UNIVERSITY Longwood University freshman forward JaShaun Smith, in the air, made valuable contributions on the floor for the Lancers despite their loss to host Winthrop University on Saturday afternoon.

The top of the Big South standings got a bit more crowded in men’s basketball Saturday afternoon.

Big South Preseason Player of the Year Keon Johnson went off for 20 points, six rebounds and four assists to lead preseason favorite Winthrop University (11-4, 3-1 Big South) to an 83-65 win over first-place Longwood University, handing the Lancers their first Big South Conference loss and joining them in a five-team tie for the top spot in the conference.

The Eagles pulled away with a 49-point second half to snap Longwood’s program-record three-game Big South winning streak.

“Our depth played a huge part,” said Longwood Head Coach Jayson Gee, whose injury-decimated roster is down to just eight scholarship players, seven of whom played 20-plus minutes Saturday.

Longwood got 14 points from leading scorer Khris Lane, a redshirt junior forward, 12 each from senior guard Darrion Allen and freshman forward JaShaun Smith and 11 from senior guard Isaac Belton. However, those four double-figure scorers did little to match a Winthrop team averaging a conference-best 78.8 points per game and holding opponents to a conference-low .413 shooting percentage from the field.

The Lancers will follow the Winthrop loss with another matchup against a Big South frontrunner when they face reigning Big South champion and host University of North Carolina at Asheville on Wednesday. Tipoff is scheduled for 7 p.m.