Falcons ‘lift each other up’ 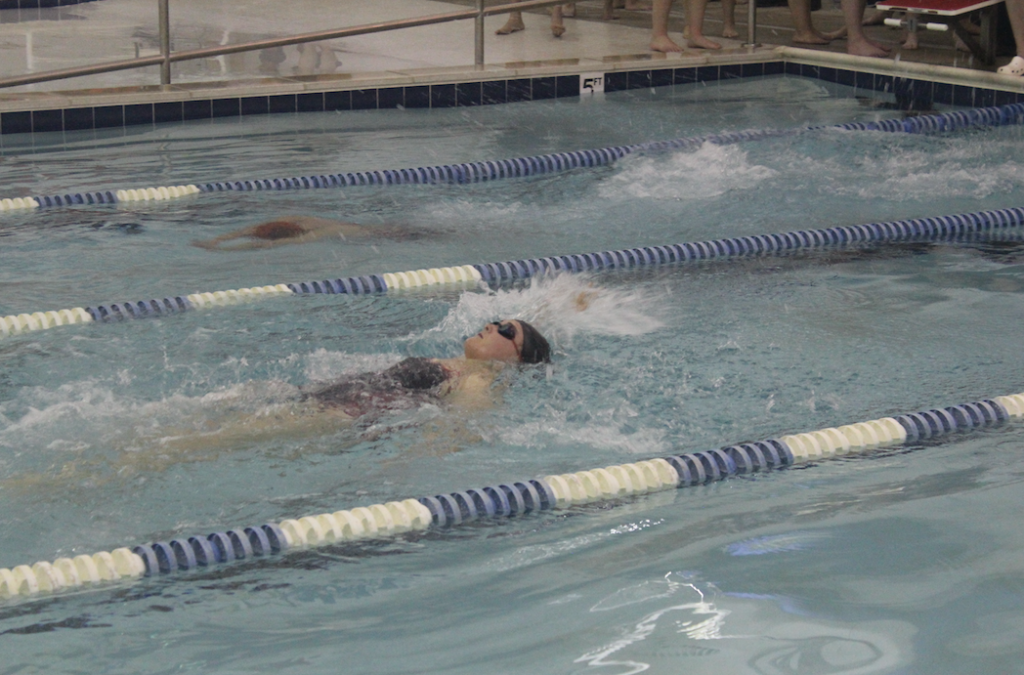 The Fuqua School swimming program is young and small, but it has brought back the vast majority of its swimmers from last year, and they are helping each other improve.

“Everybody on the team is really friendly with each other and cheers each other on,” Fuqua Head Coach Danielle Sisson said. “As far as morale and stuff goes, it’s amazing. That’s why I love coaching Fuqua because all the kids are so sweet to each other. They lift each other up, so it really can’t get any better than that.”

Sisson is in her second year as coach of Fuqua’s program, enjoying the opportunity to work further with its swimmers, as only two of them are gone from last year’s team, both due to graduation. The Falcons should have strong continuity in their lineup through the 2017-18 season.

“It’s going to be the junior class that we have now that’s going to take a huge hit to the team, because it’s like half of our swimmers are juniors now,” she said.

Sisson has focused on individual achievements because team victories are largely out of reach for Fuqua right now.

“We would never win a swim meet per se, because we don’t have enough kids,” she said.

With enough swimmers filling all of the events and earning team points with high placements, teams achieve victory.

As Fuqua’s program grows, the team angle will become more of a focus.

Sisson said Fuqua’s varsity teams consist of approximately 25 swimmers this season, and the overall program also features three sixth-graders. The number of boys and girls is about even, with quite a few sophomores joining the large number of juniors participating.

“There were several swimmers last year that kind of went above and beyond what I expected,” Sisson said.

Included in that group was Thomas Watson, who has since graduated and is attending the University of Virginia, where he is swimming for the school’s club team.

“He made it to states last year (with Fuqua), so that was awesome,” Sisson said. “And he did it in two events, whereas before, he thought he was only going to make it in 50(-yard) free(style), he got it for 100(-yard) backstroke last year.”

Andrew Horton, who returns this year as a junior, was another swimmer who stood out last season.

“He started doing 500(-yard) freestyles, which is 20 laps in a meet,” Sisson said. “He started with a pretty good time, like seven minutes. In my first swim meet with him, he dropped 16 seconds, which, in the swimming world, is a lot.”

Horton is looking to qualify for states this year in the 500 free and the 50 free.

Sisson said mental discipline is key to succeeding at long-distance swimming as participants need to be keeping up a good pace throughout.

“If you don’t need me to pull (you) out of the pool when you’re done, then you’re not going fast enough,” Sisson said she has told her long-distance swimmers.

Eighth-grader Maria Pack joins the Fuqua varsity squad this year, having also swam while in middle school and for the YMCA.

“She’s come really far, and I think that she’s going to have a really good standing on (the) swim team,” Sisson said. “She actually did really well in the 100 freestyle and the 200 backstroke, as well.”

The coach said Pack wants to do the 500, too, and more practice could pave the way for that.

Freshman Kaley Sublett drew praise from Sisson for starting to do the butterfly, which the coach said is “just out of this world. She’s going to be really good.”

Sisson expects Pack and Sublett will eventually make it to states.

“And that’s always the hope,” she said.

The program’s only senior this season, Carson Johnson, is showing strength in the 50 free and the 100 free.

“This is his first year, and he’s already swimming butterfly for the varsity boys group medley relay,” Sisson said, noting that beginners typically do not do the butterfly.

She said he will be working the rest of the season to get his endurance up to do the 100-yard butterfly.

Eighth-grader Sophie Watson has demonstrated a diversity of skill, and like Sadler, she is starting to do the butterfly, working to increase her endurance.

“She’s actually my fastest girl in the 100 backstroke,” Sisson said.

Fuqua’s boys and girls teams will host Chatham Hall and Blessed Sacrament Huguenot Catholic School for a meet at the Southside Virginia Family YMCA on Thursday at 6 p.m.