Rick Ewing has been named the director of the Central Virginia Regional Library (CVRL).

Ewing will fill a vacancy left by Peggy Epperson, the previous regional director. Epperson retired in September after more than 25 years with the system. 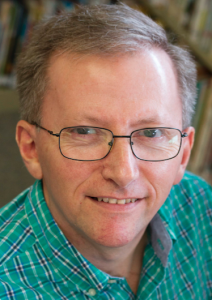 “She took a chance on hiring me into the system a year ago,” he said of his position as librarian in Dillwyn at the Buckingham Branch Library.

“Most importantly, she left the (CVRL) system in very good shape,” Ewing said of Epperson. “She was easy to work with, and I enjoyed my time with her very much.”

Ewing said he hopes Epperson stops in regularly to visit. “I’m sure I’ll have lots of questions she can help me with as I get up to speed and move forward as the new director.”

Ewing’s original involvement with CVRL began on Jan. 19, 2016 as the Buckingham branch manager.

On Jan. 3, nearly a year after his initial hiring date, the CVRL board held a special meeting to finalize its decision to hire Ewing.

Currently, as Buckingham’s branch manager, Ewing’s responsibilities include providing services at the branch in Dillwyn, such as staffing the front desk, supervising the staff, being visible in the community, attending meetings and offering programming.

“As director, I’ll be responsible for both the Buckingham branch and the Farmville-Prince Edward branch, but, obviously, on a different level,” Ewing said. “The director deals with a lot of basic aspects, such as the budget, reports going out to the state and other agencies, making connections with community leaders in the entire service area, hiring and other (human resources) activities and planning for the future, to name a few.”

One of Ewing’s first tasks as regional director will be to hire a new manager for the Buckingham branch. “Until then, I’ll be the director and the branch manager,” he said.

“I am very fortunate to have spent the past year working with a super staff and getting to know the good people of Buckingham County,” he said, adding, “Folks in Buckingham County are truly generous, helpful, self- reliant and passionate about what they believe is important.”

Ewing called Buckingham a great place with great people, noting he’ll miss being there on a daily basis, “but I will continue to stay connected to the community — you’ll see me around Buckingham County and in the library.”

Ewing’s first goal as regional director is to get up to speed with details of the library system that he doesn’t yet know.

Since Ewing has primarily focused on Buckingham before now, he will be working to learn more about Farmville and Prince Edward at the start of his new position. He said he’s especially interested in getting to know the leaders in the town and county.

“Perhaps the single most important task ahead is to get Buckingham County a better library facility,” he said. “I will be concentrating on that effort, as I’ve been doing since I started working there. I believe we’re close to a new library there, but it’s not a done deal yet.”

Ewing said he wants to work on improving electronic resources, such as their website and social media.

He’s also interested in partnering with organizations in order to have a bigger community impact than the library would have working on its own.

“Basically, we have to be an integral part of the communities we serve — we need to be something residents know about, use and love,” said Ewing.