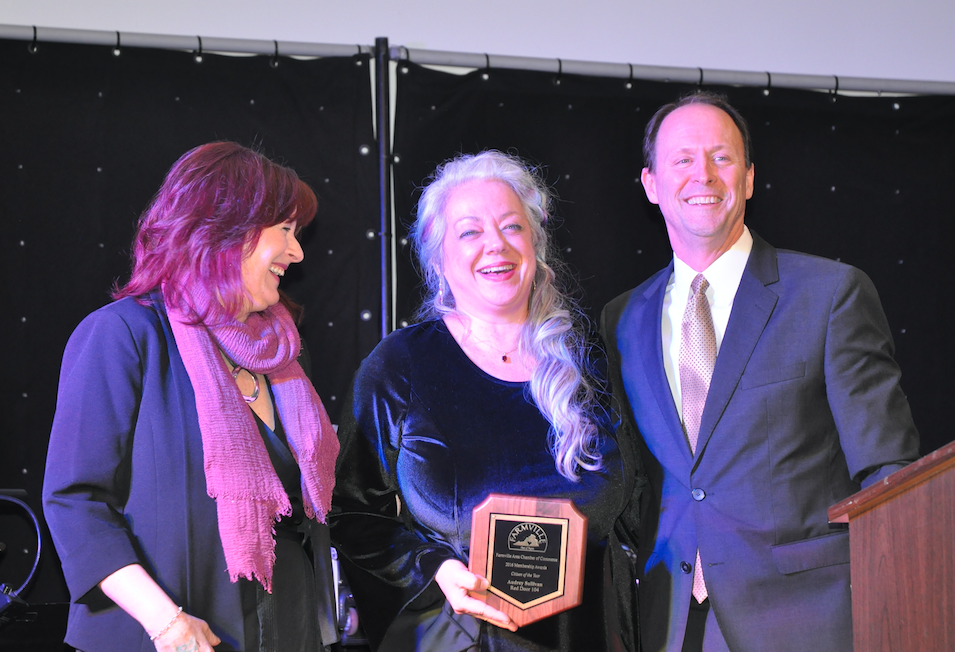 Editor’s Note: This is the final of three installments The Herald has published featuring the three major Farmville Area Chamber of Commerce award winners for 2016.

The Farmville Area Chamber of Commerce recognized Audrey Sullivan as its Citizen of the Year for 2016 during its inaugural New Year’s Eve Eve Party.

During the event, which took place on Friday, Dec. 30, Chairman of the Chamber’s Board of Directors Brad Watson presented Sullivan with her award.

“I think Audrey wanted this award to be more about Red Door 104 and less about her, but, from what I can see, they are pretty much one in the same, except for her husband, Kent,” Watson said as he praised Sullivan’s work in the community.

Sullivan and her husband, Kent Wilhelmi, founded Red Door 104 on Main Street, Watson explained, noting Sullivan “has been on a creative mission for over 20 years.”

“You could have knocked me over with a feather when Joy Stump shared this news with me,” Sullivan said.

“From our first day in Farmville, my husband, Kent, and I received a very warm welcome and it has only gotten better from there.”

During the event, Watson described Sullivan’s vast creative experiences, from “studying under some of the finest private instructors,” to founding “a successful decorative painting company.”

According to Watson, Sullivan’s passion for art was ignited at a young age while living in Italy and has continued into her adulthood.

“The available space on Farmville’s Main Street was fortuitous both for them and for Farmville,” Watson said of the building which has become an art gallery and studio space.

He said it was fortunate for Farmville that Sullivan and Wilhelmi moved to Farmville in April 2013 to be closer to family.

“If you did not visit 104 N. Main St. during the recent chamber holiday house tour, I hope you’ll find time to see their stunning home one day soon,” Watson said. “Honestly, I had very high expectations, but I went to see their house during the house tour because people had talked it up so much … when I went through the front door my jaw still dropped.”

Watson said their property is both “stunning and truly spectacular,” noting it is an inspiring place for anybody who owns property downtown.

“It is easy to be a good citizen when you are surrounded by them on a daily basis, and Farmville is full of them,” said Sullivan.

“She never seems to seek the spotlight, but her impact has been felt and is felt by many people in this community,” Watson said.

“A young woman asked me ‘What does a person do to be awarded citizen of the year?’’’ Sullivan said. “I don’t think it’s something that a person thinks about … just be kind, help others when you’re able and always from the heart, never for the reward.”