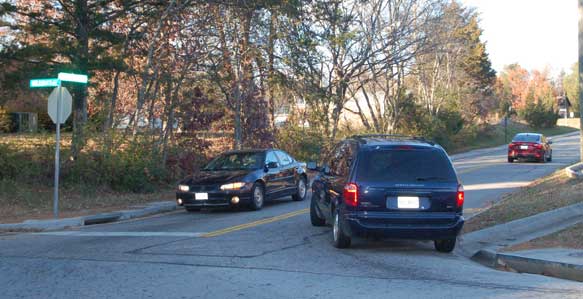 Vehicles at the intersection of Peery Drive and Williams Street near the U.S. 460 end of South Main Street. Some nearby Crestview subdivision residents continue to express concern about people using Peery Drive as a cut through to businesses at the Walmart shopping center. Farmville Town Manager Gerry Spates said the state will conduct a traffic study after the first of the year. (Photo by Martin L. Cahn)

Q: Will the town of Farmville help the Crestview subdivision by purchasing a home between Shorter Funeral Home and the new hotel?

The Virginia Department of Transportation (VDOT) will conduct a traffic study of Peery Drive after the first of the year, according to Farmville Town Manager Gerald Spates.

Residents of the Crestview subdivision continue to express concerns about shoppers and trucks using Peery Drive — from which residents can enter the subdivision — as a bypass to and from businesses along the road and the Walmart shopping center.

Spates’ news about the pending VDOT study comes after Crestview resident Deanna J. Bennett posed a series of questions in an email to the Herald. Bennett said she has learned a home situated between Peery Drive and South Main Street is on the market. She said she spoke to Spates and told him she would like for people to stop using Peery Drive as a cut-through.

“One option that has just come available is the sale of the house between Shorter Funeral Home and the new hotel,” Bennett said. “Wouldn’t the town help businesses and the Crestview subdivision by purchasing the house…? Wouldn’t it be perfect for business traffic to come in off a street that would replace the brick home… (an extension of Meriwood Farm Road)? Wouldn’t it be perfect for truck traffic to enter in off of Main Street, instead of having to wind through the entrance at Peery and Main?”

“Maybe that’s an option to look at,” Spates said of Bennett’s suggestion during an interview Friday.

In the meantime, he said VDOT would conduct the Peery Drive traffic study sometime after Jan. 1.

“We can’t predict the kind of traffic the new hotel and store would generate,” Spates said, referring to the new Tru hotel by Hilton and a new home for Schewels furniture store.

Spates also said after a council meeting earlier this year when the Peery Drive/Crestview subdivision issue came up, the town reached out to merchants asking their delivery drivers not to use Peery Drive.

“But the streets are for traffic and people have the right to use them if they want to,” Spates said. “I could put up a sign for trucks to go up to Main and Peery, but I don’t know for sure that anyone would pay attention to it.”

Spates said an earlier traffic cam study concluded there is almost 80 percent compliance in the area in terms of adhering to speed limits. However, he said that could have changed over the years — one of the reasons he contacted VDOT to try to get the traffic study sooner than later.

“This will tell us what’s going on,” he said, explaining the monitor VDOT will use can determine what vehicles are using Peery Road by weight — cars or trucks.

Spates said he didn’t want to have VDOT conduct the study during the holidays while Longwood University students are out of school.

“We are as concerned as the residents are about this,” Spates said. “If there is a problem, we want to address it.”