JOHN HALL The picture above shows Hampden-Sydney College’s Fulton Field on Oct. 29, ready for play after H-SC Sports Turf Manager John Hall orchestrated a remarkable 19-day restoration process that brought the field back to life in the wake of its devastation on Oct. 8 that came about due to Hurricane Matthew and a competitive football game.

When the Hampden-Sydney College (H-SC) football team had completed a job well done against Guilford College at Fulton Field on a rain-soaked Oct. 8, John Hall’s job was just beginning.

Hall, H-SC’s sports turf manager, looked on after the game at what the combination of Hurricane Matthew-induced weather and two football teams locked in a highly competitive battle did to his field.

“I’ve never seen anything like it,” said Hall, who has more than 10 years of sports turf management experience, including eight years with minor league baseball teams.

He said he had “a bag of emotions” following the Tigers’ upset win over the nationally-ranked Quakers in what could appropriately be called the Mud Bowl.

“From a football fan’s perspective, it was awesome because you don’t really see that type of game often,” he said. “Now, they typically either move a game forward or back. They don’t ever just play it out. And of course, with new fields, they drain a lot better. Our field is a traditional native base field with no subsurface drainage.” 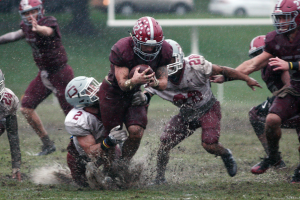 The Tigers feared they would never play on it again.

Nevertheless, while the field was unworkable Oct. 9 and 10, the challenge lay ahead of Hall to actually get it ready for Hampden-Sydney’s next home game against Emory and Henry College a mere 19 days later.

“Challenge is an understatement,” Hall said. But he added that “where there’s a will, there’s a way.”

Hall and H-SC Groundskeeper Thomas “Kirk” Kirkpatrick worked 14-hour days Oct. 11-14. They rolled the field extensively, leveling high and low areas throughout the field and firming up the playing surface.

After doing this, Hall and Kirkpatrick had a better idea of how much sand would be needed. It ended up being 60 tons.

The sand functioned to level out the field, help with drainage, with seed establishment and with soil temperature, possessing the ability to account for a 2-3 degree difference that can help grass grow faster.

The weather also proved conducive to growth, holding in the 80s one week and the 70s the next.

“With budgets, we didn’t have the current funding to re-sod the entire field, so our only other option was seeding,” Hall said. “And with these newer technologies on seed, as well, it allowed me to grow grass quicker and provide a healthier plant in, what, 19 days.”

Hall and Kirkpatrick put down a literal ton of grass seed to re-grow Fulton Field. The name of the grass is Barenbrug Regenerating Perennial Ryegrass.

A key step in the restoration process was aeration.

“We aerated after we rolled and after we top-dressed to work the sand into the soil profile and then, of course, one more time before we seeded to ensure seed-to-soil contact,” Hall said.

After returning to a normal schedule for about a week-and-a-half, Hall and Kirkpatrick began putting in 12-hour shifts in the days leading up to the Oct. 29 Emory and Henry game.

Hall said he knew he could get grass growing again and have it by the 29th.

Hall knew that working a field over with equipment is different from a 200-pound athlete ripping, grinding and cutting on the turf during the course of a football game.

He had the Tigers wide receivers take the field prior to game day to see what kind of footing they had as they ran routes and made cuts.

After taking in the field’s performance during the Emory and Henry game, Hall was quite pleased.

“It exceeded my expectations,” he said. “I knew that we were going to lose turf, but honestly, we had very little loss during the game.”

He said the state of the field now in December is better than it has been the last two years after football season.

In all, Hall and Kirkpatrick put in more than 200 hours to bring Fulton Field back to life in 19 days.

“Hard work pays off for itself is what Kirk and I got out of it,” Hall said, as their collective will paved the way.