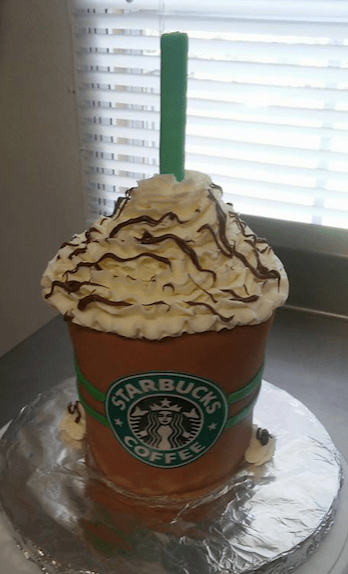 KARIE MCCOY A cake made by McCoy resembles a Starbucks drink.

When Karie McCoy moved to Cumberland County, neither she, nor her neighbors, could have guessed the sweet success she would find there.

It was there where the 42-year-old mother of three decided to pursue her dream of baking professionally.

Just three years ago, McCoy and her husband, Chris, moved to town with her children. It was around this time McCoy opened her business.

“It started because of friends and family encouraging me to follow my destiny,” she said. “I would bake for them at the holidays.”

Her support system gave her the faith she needed to open her own bakery. “So after a year of baking and selling at the flea market on the weekends, my husband and I agreed it was time to take it to the next level,” she said.

McCoy said her husband has been her biggest supporter. “He’s always been there encouraging and helping me any way he could.”

Chris has helped by searching for equipment she’s needed and by going to auctions to purchase a big mixer so she can bake easier. McCoy said he’ll stay up with her to midnight when she’s working on specialty cakes.

“My daughter has recently started helping more when we get busy,” McCoy said. She has three children: Cody, Aryanna and Christopher.

The tradition of baking alongside relatives is one that dates back to McCoy’s childhood.

She was first introduced to baking by her father when she was only 12 years old.

“I would watch my dad in the kitchen, and when I started seventh grade, I took home economics class and fell in love,” McCoy said.

From there, it became a competition between her and her dad to bake the best peach pie for the fair each summer.

She furthered her skills by working in a small family-owned bakery in Culpeper called Knakal’s, as well as the Walmart bakery. The experience helped McCoy as she built her business, Karie’s Baked Goods.

“When we moved to Cumberland, we knew no one,” McCoy said. Now nearly everyone knows her. “I believe that comes from my mobile sales on Thursdays and word of mouth in a small town,” she said.

When McCoy first arrived in Cumberland, a customer recommended she visit the French family. “Little did I know then what a blessing that was. Through baking for the produce stand and word of mouth, they started the growth of my business here in Cumberland,” McCoy said.

McCoy doesn’t have a specific item she likes to bake more than another. She gains the most satisfaction from seeing others react to her baked goods.

“I always say, ‘I don’t do anything anyone else can’t do. I just do something they don’t want to,’” said McCoy. “Of course, when we make a cake that looks like a 32-inch Subway sub, I do smile a little bigger.”