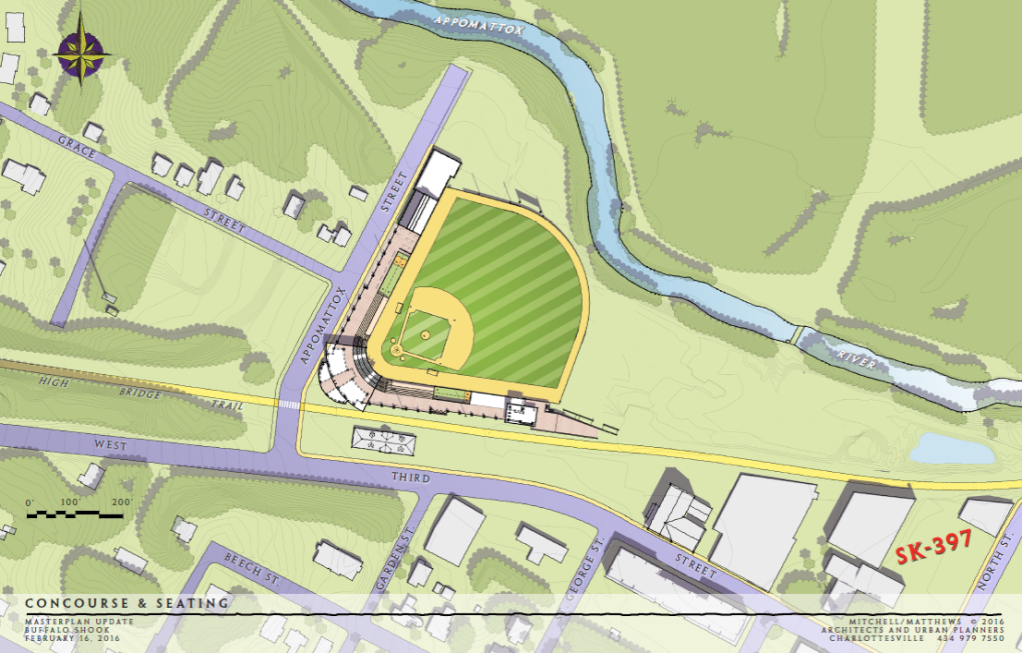 Longwood University A conceptual rendering depicts a baseball diamond in downtown Farmville at the site of the former Buffalo Shook Co. Inc on West Third Street. Longwood’s Real Estate Foundation purchased the property, and a portion of property at the former W.C. Newman Co. concrete plant, for $6.8 million.

The transaction, recorded in November in the Prince Edward County Circuit Court Clerk’s Office, lists the purchaser as Longwood Riverview LLC and the seller as LU Eight LLC.

A baseball diamond in downtown Farmville is one of the central highlights of Longwood University’s new conceptual master plan.

The Longwood Board of Visitors — the university’s governing body — has taken procedural steps to endorse the plan.

University officials believe a first-rate baseball facility could attract a professional minor-league team during the summer months to complement spring usage by the Longwood baseball team.

“The ideas about connecting the campus with downtown, and improving walkability and traffic flow — those are really conversation starters,” said Justin Pope, the chief of staff to Longwood President W. Taylor Reveley IV, in a previous interview. “Obviously those are things for Longwood and the town to think through together, as we already do. But we had these world-class urban planners at our disposal, and we told them: ‘Come up with some really creative ideas that would be worth considering with the community. Help us think big about what would really make this place even better.’”

In a previous interview, Farmville Mayor David Whitus called the ball fields downtown “a phenomenal idea. It is a long-range idea. Not only do you have to create the fields, but you have to attract a team.”

The fields and associated activity would change the dynamics of Farmville, Whitus said.

“It’ll bring people from a wide geographic area. It’s very exciting if they can bring that to fruition,” he said.

“This field could be in use by our teams (and) by minor league teams almost 10 out of 12 months out of the year. There could be this constant hum of activity downtown, which can be a really neat thing,” Reveley said.

Construction of the baseball stadium could hinge on interest from minor league teams, Reveley said.