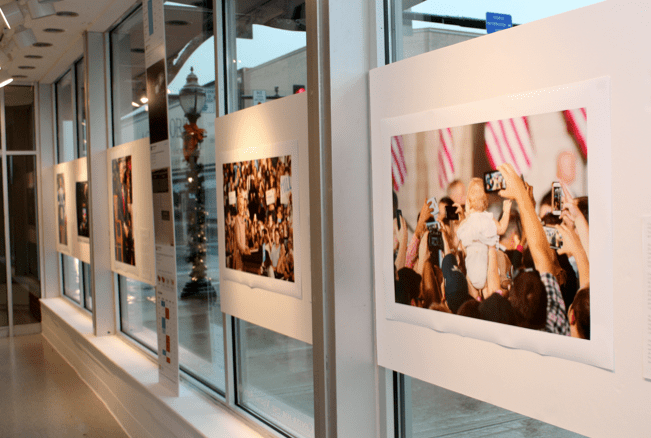 ALEX GRABIEC | LCVA A portion of the Longwood Center for the Visual Arts’ Re:Viewing the Election exhibit, on display through Jan. 29.

Some of Longwood University’s most talented students are featured in the Longwood Center for the Visual Arts’ Main Street Gallery this winter. Re:Viewing the Election culminates one of the most distinctive and remarkable collaborations from the more than 30 Longwood courses that emphasized themes of civic engagement inspired by the university’s hosting of the 2016 vice presidential debate in October.

This fall, Longwood professors Michael Mergen and Jeff Halliday brought together students from their respective ART 495: On The Campaign Trail and COMM 341: Advanced Media Writing classes to create the unique learning experience. Working together as photographers and multimedia journalists, students documented the candidates as well as supporters, detractors and the media, chronicling the infinite small moments that make up an election cycle. Along the way, they developed and defined their own styles and approaches to political coverage while remaining committed to telling the stories of everyday citizens.

The collaboration was Mergen’s brainchild, himself a professional with deep experience covering presidential campaigns for national news organizations, who noted the work of his students is on par with the best he’s seen from his professional colleagues. Halliday’s students learned the ins and outs of live-event coverage, incorporating video and audio elements into their reporting, while utilizing social media platforms to exemplify standards of practice for media professionals. For Re:Viewing the Campaign, Halliday’s students created the text, video and interpretative elements while Mergen’s created the photographs. The two classes curated the exhibition collaboratively.

“My students witnessed and documented the political process. Not in theory, in lectures or readings assignments, but on the ground, firsthand. We talk about creating citizen leaders here at Longwood and I can’t imagine a more fitting classroom than campaign rallies and debate stages,” Mergen said. Students were sometimes members of the crowd and at other times fully credentialed members of the media.

“As close as the students thought they had gotten to a full professional experience, [the experience of being credentialed media] blew it out of the water,” Mergen said. “Six students sat on the media riser bedside CNN and Fox News cameras — an opportunity not many photographers ever get.”