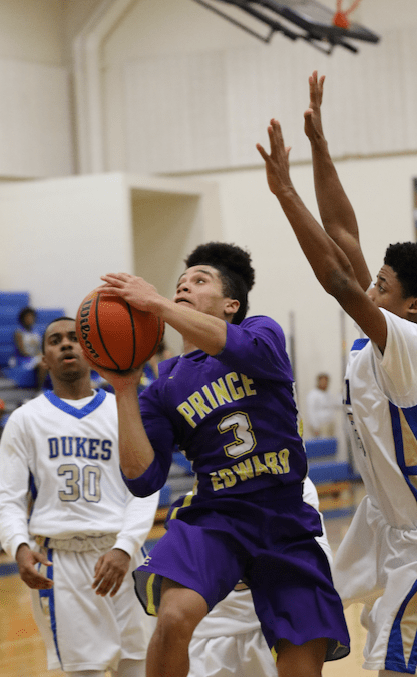 The Prince Edward County High School varsity boys basketball team is off to a 5-3 start in its 2016-17 season, including a 5-1 record in the James River District.

In their most recent game, the Eagles engineered a second-half comeback to hand host Cumberland High School a 48-40 loss Thursday evening.

Prince Edward (PE) was coming off of its first district loss of the season two days prior on Tuesday, a tough 46-43 defeat to host Amelia County High School.

“We wanted to erase that loss on Tuesday night, and we came out a little flat,” Prince Edward Head Coach James Scott said after Thursday’s game. “And Cumberland, they played very hard.”

After trailing early, the Dukes went on a run and took a 26-17 lead late in the second quarter and held a 26-20 lead at halftime.

The Eagles were able to turn things around in the third quarter, though, outscoring their hosts 17-2 to take a 37-28 lead into the final period.

Cumberland kept within striking distance, but Prince Edward was able to stay out in front.

“We figured that we could put a little pressure on them, because they were beating us when we were in that man-to-man (defense), and we just had to throw different defenses at them, mix it up a little,” Scott said.

The Eagles are looking to improve on last season when they finished as runners-up in the Quad River Conference 34 tournament, falling to Bluestone High School in the championship game. After winning their first-round game of the Region 2A East tournament, the Eagles lost in the second round to George Mason High School.

“It’s a younger team,” Scott said, adding that some of the seniors are new to the squad. “We’re working extremely hard. There’s room for improvement, but each game, we’re getting a little bit better.”

Even if Prince Edward is younger this year, Scott’s expectations remain high.

“I want to win the district, first of all; we want to be first,” he said. “If we work hard and stay as a family, we can reach certain goals.”

Among those goals is winning the conference, as well.

Key to the Eagles’ efforts this season will be 6-foot, 3-inch senior center Kevon Braxton.

“He brings height, he brings awareness of the game — he knows the game,” Scott said. “He’s a student of the game. He’s the one that’s been with me the longest.”

He said Braxton has played for him for four years.

“He can get the job done inside, but he’s working extremely hard,” Scott said.

Through seven games of recorded statistics, Braxton has averaged 9.6 points and a team-high 6.6 rebounds per game.

Senior shooting guard Zarius Jones has been on the varsity team since moving up during his sophomore season. Both Jones and Braxton possess state-level experience, having played for the 2014-15 Eagles squad that made it to the Virginia High School League Group 2A state semifinals.

Of Jones, Scott said, “He helps us tremendously on offense. (Senior Quantavis) Nash, as well. And they play hard defense.”

Jones averaged a team-high 15.9 points and 1.7 steals per game through seven games, and Nash averaged 8.3 points.

Senior Arthur Wright drew praise for his strong defensive play from Scott, who said Wright is a scrapper and quite physical.

“He plays a very important part in the scheme of defense,” Scott said of Patterson, who also averaged 8.9 points through seven contests.

The coach said the younger players on the team are developing, tagging freshman forward Isaiah Dailey, freshman center Chris Hicks and sophomore power forward Jair Haskins as up-and-comers that fans should be hearing about in the future.

Scott also pointed to sophomore center A.J. Lewis as a future force, who can already help the Eagles when Braxton and Hicks get in foul trouble.

Prince Edward returns to action Monday at 6 p.m., facing Central Virginia Homeschool at Cumberland High School in the two-day Cumberland Christmas Tournament. The Eagles will play again the next day.