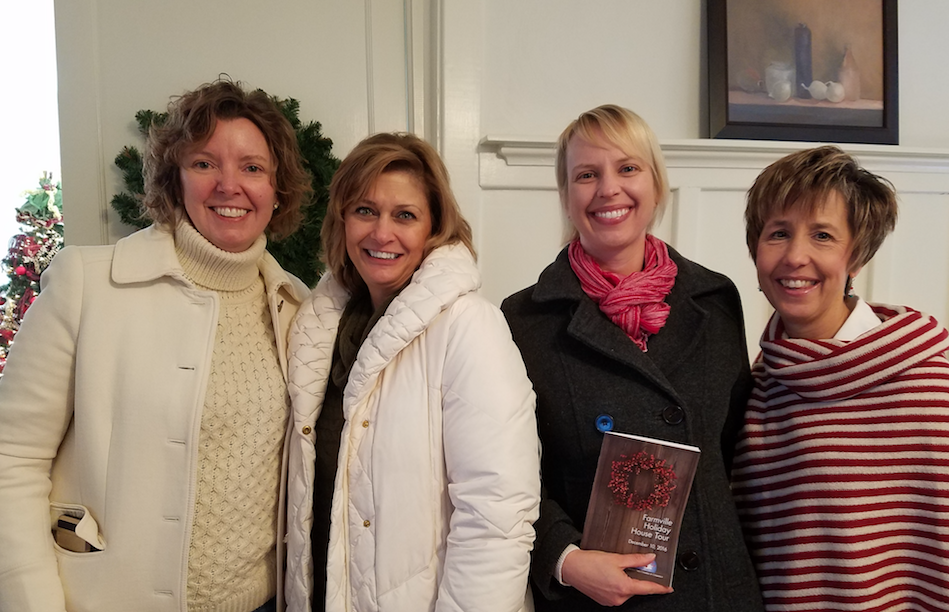 CHAMBER OF COMMERCE Checking out the “White House” at 900 High St. during Saturday’s Holiday Tour of Homes are, from left Maureen Walls-McKay, Paula Ellison, Stephanie Bucher and Susan Sullivan. The Farmville Area Chamber of Commerce sponsored the tour.

The Farmville Area Chamber of Commerce held its annual Holiday Tour of Homes on Saturday, highlighting a number of homes in the community in an effort to put visitors in the holiday spirit.

“We hoped to attract people from outside of Farmville during a busy shopping weekend too,” Chamber Executive Director Joy Stump said. “We highlighted 10 homes and they included historic homes, mid-century, and a new renovation of a building on Main Street. Longwood even opened Ruffner Hall to show the Rotunda and the beautiful decorations. They also offered the participants refreshments.”

The tour serves as a fundraiser for the chamber, and also raised funds for Farmville Area Habitat for Humanity. The chamber will present Habitat with a check in January.

“A newly renovated Habitat home was also featured on the tour,” Stump said. “Everyone felt this was a huge success for our first time and asked us to please do this again.” 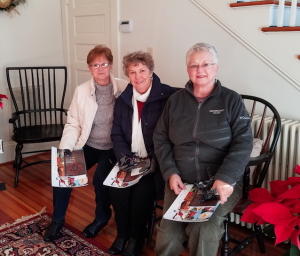 CHAMBER OF COMMERCE
Visiting with each other during Saturday’s Farmville Area Chamber of Commerce Holiday Tour of Homes are, from left, Deanna Purser, Roberta Foster and Betty Vanderpool as they visit the “White House” at 900 High St.

Individuals and groups who took the tour got to see the following homes in Farmville:

• 900 High St., The White House — currently owned by Centra Southside Community Hospital and used to host special events and house visiting doctors and officers. It is considered an example of the type of home a “comfortable middle-class businessman” would have built around 1900.

• 700 High St. — currently owned by Farmville Ward B Councilwoman Sally Thompson and her husband, the Rev. Dr. William Thompson. It was built in 1903 in the Queen Anne style popular from 1880-1910.

• 313 First Ave., The Inn on the Avenues — built in 1910 by a descendent of the Hillmans of Sailor’s Creek. The inn is owned and operated by Janie Irons and her mother, Ann.

• 413 Second Ave., The McClintock House — built in 1937 in the Georgian Revival (or Colonial Revival) style, the home went unchanged until a major renovation in 2005. Current owners Mr. and Mrs. Harlan L. Horton have been told a ghost has been seen there.

• 800 Second Ave., The Preserves on the Avenues — a Colonial Revival home built in 1939 and loosely modeled on Westover plantation on the James River. It is currently owned by Mr. and Mrs. Jason Tibbs.

• 301 High St., Ruffner Hall, Longwood University — including its famous rotunda, it dates to the 1880s and was rebuilt following a 2001 fire that happened during a $12 million renovation. It is the home of “Joanie on the Stony,” a statue of Joan of Arc, and is also home to classrooms as well faculty and administrative offices.

• 104 N. Main St., the Capps Building — built in 1910 by Dr. C.P. Capps in the Beaux-Art style. The building remained commercial for 104 years until Kent Wilhelmi and his wife, Audrey Sullivan, converted the upstairs into their home. Also the home of Red Door 104, further renovations will be completed in 2017.