Michael O. Walker, who has been the president and CEO of Benchmark Community Bank for more than a decade, announced he will retire in May. According to a Benchmark press release, while Walker will no longer be involved in bank operations on a day-to-day basis after retirement, he has agreed to serve as an advisor to management and the board of directors. 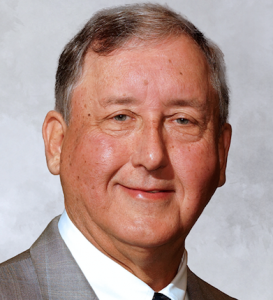 During an interview Monday, Walker, who lives in Victoria, said the art of banking in Lunenburg County has been his focus since 1974.

“I’ve taken that same process to the rest of our branches,” he said. “In my early days, I was the manager of the Victoria office for 15 years. I moved into administration, opening our first branch outside Lunenburg in Farmville.”

“That was 40 years ago,” Walker remarked, “and as of February, I will have been in banking for 45 years.”

He noted he has spent his entire personal and professional life in the area.

“I’ve met and worked with a lot of people in Southside Virginia and I still enjoy it today as much as I did in 1974, he said.

Walker has also maintained connections with, and held offices within, several state- and national-level banking associations.

Walker’s announcement is the final step in a succession plan initiated several years ago to ensure a smooth transition in the top leadership position of the bank, according to the press release. In accordance with the plan, the bank named Jay A. Stafford in May as Walker’s successor. He will become president and CEO of both the company and the bank when Walker retires.

“Mike has been a wonderful mentor to me over the years,” Stafford said. “His guidance has helped me prepare for the role I will assume when he retires. Fortunately, he will be leaving the bank in a strong position for continued success. As I follow in his footsteps, I will be striving to move the bank in the same positive direction.”

Since 1974, Benchmark has grown from a $5 million one-office operation to a $575 million multi-branch financial institution with 37,000 customers. During Walker’s tenure as president and CEO, Benchmark has been recognized as one the leading banks in Virginia, received numerous national awards, and almost doubled in size. Assets were $296 million and there were just 10 branches and less than 20,000 customers when he took over.

“Words cannot adequately describe the depth of gratitude I have for the opportunities afforded me during my time with the bank,” Walker said in the release. “I can truly say that I have enjoyed every single day of my career as a community banker. It has been a privilege to serve the people and communities of this area, helping them with their financial needs. The countless individuals that I have met in the process — as well as the many talented people with whom I have worked — have added to the richness of my life. I have had an exceptional experience. I am indeed fortunate.”

Board of Directors Chairman Ernest R. Lail had praise for Walker as well.

“We are thankful for Mike’s longstanding service and dedication to the bank,” Lail said in the release. “His contributions over his 40-plus-year career here have been many. He has been successful at all levels, from managing a branch to overseeing the retail branch network to ultimately leading the organization. He will be greatly missed.”