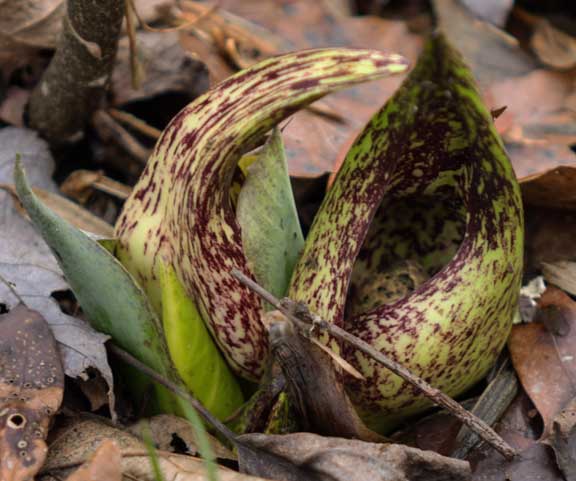 Annual ramble in the woods

My family has a long-standing tradition of taking leisurely walks in the woods during the week between Christmas and New Year’s. It’s a great way to slow down and reconnect with Mother Nature. Besides, we all need the exercise and a way to clear our heads.

This year, several of us took an early “sneak peek” walk, just to see what’s out there. The weather had been unusually warm, so we thought there might be some surprises. And we were right. The skunk cabbages (Simplocarpus foetidus) are usually up by late December, but this year, they were up and in their full glory by Thanksgiving. They’re thermogenic plants, meaning they can generate heat to melt their way through ice and snow. Some botanists have reported that the interior of a skunk cabbage can be as much as 15-30 degrees warmer than the outside temperature. Skunk cabbages can be hard to spot because the brownish maroon and cream markings help them blend into their surroundings. Look for them in wet to swampy areas. There are lots and lots at Holliday Lake State Park, and the search for them is great fun. By early spring, bright green leaves that slowly unfurl into very large specimens will replace the blooms.

What else to look for? The Cranefly orchids (Tipularia discolor) have put up new leaves. They’re interesting natives. Each plant produces a single, distinctive leaf in late fall to early winter. It’s dull green on top and on the reverse side it’s beet red. The leaves remain above ground all winter and through mid-summer and then they disappear and are replaced with flowers. Each plant produces a single stalk of delicate, brownish colored blooms in late summer. Once in a while, you’ll find a stalk of seedpods still standing when a new leaf emerges.

The putty root orchids (Aplectrum hyemale) have also produced new leaves. Like the cranefly orchid, the puttyroot produces one leaf per plant. In this case, it’s dull green on top and looks as if it has pin stripes. Putty root orchid leaves persist all winter and then die back in April-May. Around the time the pink lady’s slippers bloom, the putty root orchids each produce a single flower spike, which initially looks remarkably like an asparagus spear. When the flowers open, they’re greenish-brown with a white lip. This orchid is sometimes called the Adam and Eve plant because a slender rhizome closely connects its pair of corms.

If you find either of these orchids, you may want to mark the location so you can return later to see the blooms. They may look insignificant at first, but they’re lovely.

And while you’re walking along, be sure to check along stream banks for liverworts and interesting fern. It’s been so warm, you’ll probably find a few bluets too. You just never know what you might find in Mother Nature’s garden. Just take a slow, leisurely walk and be ready for surprises.

Cynthia Wood is a master gardener who writes two columns for The Farmville Herald. Her email address is Cynthia.crewe23930@gmail.com.

When I was a little kid growing up on a local farm, we had a very scraggly looking, old apple... read more