MARTIN L. CAHN | HERALD All of the models gather for the finale of the hat show portion of Saturday’s event inside the Blackwell Ballroom on the Longwood University campus.

Longwood and its food vendor, Aramark, provided the meal, including tea. The program also included door prizes of copies of The Girl from the Tarpaper School by Teri Kanefield, Something Must Be Done About Prince Edward County by Kristen Green and Educated in Spite Of by Dorothy Holcomb. Other prizes included Mary Kay gift certificates and a shawl from Vellie’s Boutique. 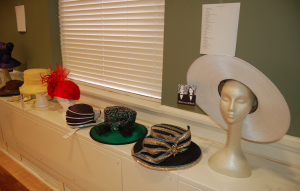 MARTIN L. CAHN | HERALD
A selection of the hats for sale — which would also be modeled — during the Rainbow Tea & Hat Sale event Saturday sit in Longwood University’s Blackwell Ballroom. Vellie’s Boutique in Farmville, which sponsored the hat show portion of the event, donated 50 percent of the hats’ sales Saturday to the R.R. Moton Museum.

Dr. Theresa Clark, of Longwood University, served as mistress of ceremonies. As part of her opening remarks, she asked for a moment of silence to remember the late Col. Martha Stokes Cleveland, who passed away in September. She remembered Cleveland as someone who supported not only the Moton Museum, but Longwood University itself, including its “Call Me Mister” program.

Rainbow Tea & Hat Show Committee Chair Beatrice Kennedy welcomed everyone to the fourth annual event. As indicated on the event’s program, Kennedy said the Moton Family Challenge “honors the families of whose school-age children were at the center of Prince Edward County’s 1951 to 1964 fight for civil rights through education.”

Through the Challenge, donations can be designated in memory of those children and families “whose sacrifice transformed American education for all.” 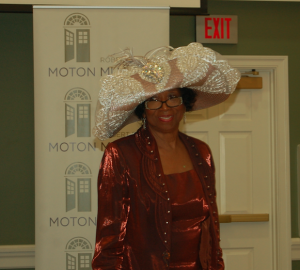 Dr. Clark then introduced all the Color Captains — Family Challenge teams designated by the colors of the rainbow: red, orange, yellow, green, blue, indigo and violet.

As attendees finished their meals, the hat show portion of the program began with Vellie’s Boutique and Diamond Hill owner Vellie Dietrich-Hall calling out the models — made up of volunteers from the various teams — and describing the hats they wore.

Dietrich-Hall announced that 50 percent of proceeds made from purchasing hats Saturday would go to the Motom Museum.

“I am proud and thankful for what you are doing,” Speakes said. “No one thought we would raise enough money … (but) in six years we have raised almost $300,000.”

Speakes announced that this year’s efforts have added $50,000 to the total — enough, she said, to pay for two scholarships that could range over an entire four-year course of study. 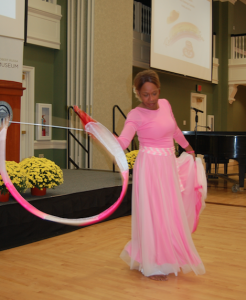 Speakes said this proves “families together can do an awesome job.”

Lancers dress up for Slugfest

The Longwood University Lancers Baseball team donned costumes for a special game at Buddy Bolding Stadium in front of a... read more