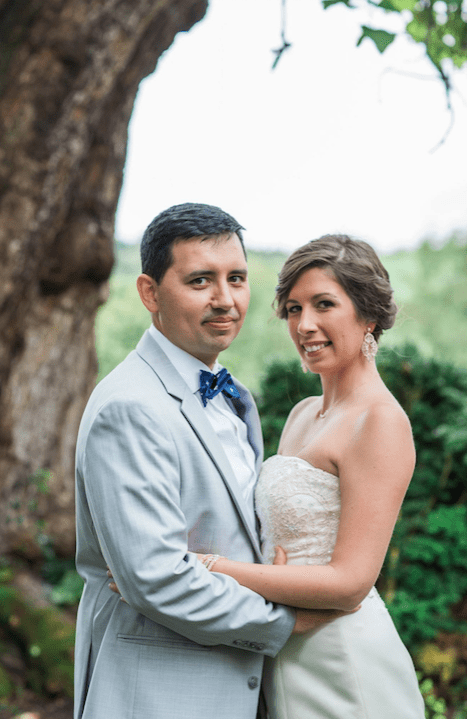 Paula Michelle Ferguson and Benjamin Francis Louis were united in marriage on October 8, 2016 at “Santillane” in Fincastle, Va. The ceremony was officiated by Reverend Dr. Catherine Taylor, minister at Blacksburg Presbyterian Church, and music was provided by a trio of young musicians from Radford, Va. The ceremony was followed by a lively reception on the grounds under the pavilion, featuring Indian cuisine and a beautiful cake baked with love by the bride’s cousin.

Given in marriage by her parents and escorted by her father, the bride wore a strapless satin James Clifford Couture bridal gown. The gown featured hand beaded and embroidered designs with a semi cathedral train. The bride carried a hand tied bouquet of peach garden roses, burgundy dahlias and football mums.

The bride received her undergraduate degree from James Madison University and her Master’s degree in Speech-Language Pathology at Radford University. She currently is employed as a speech pathologist at Carillion Roanoke Memorial Hospital.

The groom attained his undergraduate degree from Virginia Commonwealth University and his Master’s degree from Va Tech. He is currently a doctoral candidate at Va Tech with the Planning, Governance and Globalization program and also teaching several classes at Va Tech. Following a honeymoon in Floyd, Va., Ben and Paula will reside in Blacksburg, Va.