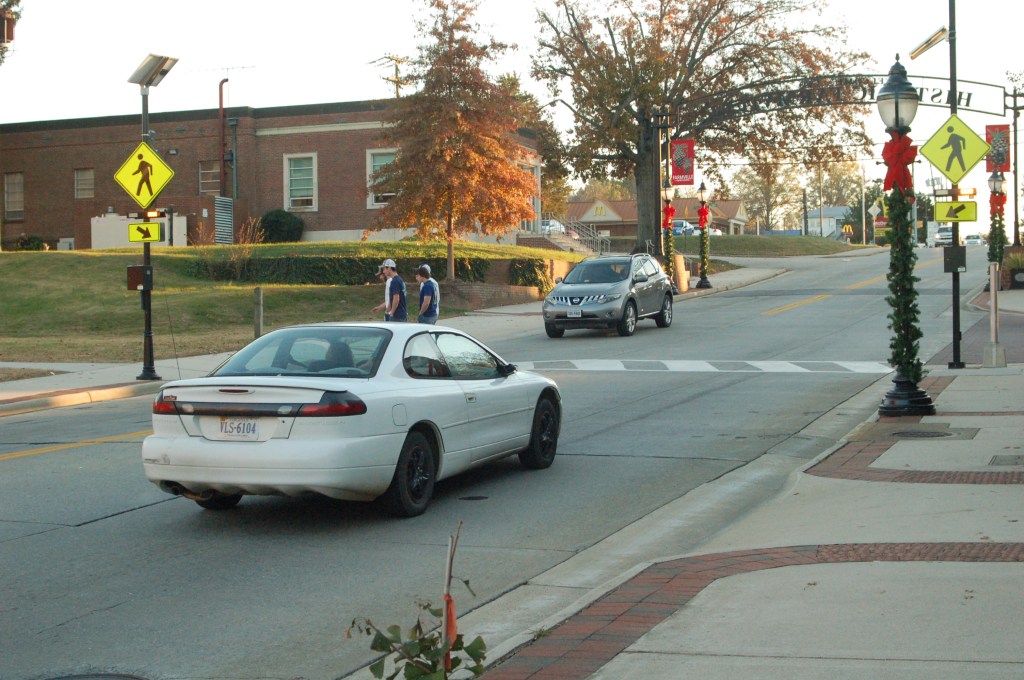 MARTIN L. CAHN | HERALD Vehicles wait as Longwood University students cross Main Street in Farmville at a special crosswalk where flashing lights can be engaged to warn drivers to stop for people crossing the street. The young men activated the lights before trying to cross the street. All crosswalks and their flashing lights or walk/don’t walk signs in Farmville are under the town’s jurisdiction.

Who has the right of way at a pedestrian crosswalk in Farmville?

A week ago, a man struck a male pedestrian at the intersection of Main and Third streets in downtown Farmville. Town police charged the driver with failure to yield to a pedestrian. The incident brought up some questions on The Farmville Herald’s Facebook page: Who controls the town’s crosswalks and who has the right of way, pedestrians or drivers?

The answers are Farmville controls crosswalks within the town limits and pedestrians have the right of way once they are in a crosswalk. The only difference in how drivers should react depends on whether the crosswalk is at an intersection or in the middle of a block.

“If the pedestrian is in a (intersection) crosswalk, then drivers must yield,” Town Manager Gerald Spates said, adding the town follows state law. “Once the traffic light goes off the protected (green) arrow, drivers have to yield.”

According to the Code of Virginia, the driver of any vehicle on a highway “shall yield the right of way to any pedestrian crossing such highway.” This includes at “any clearly marked crosswalk, whether at mid-block or at the end of any block.” If a law enforcement officer is directing traffic, drivers should follow those directions. Regardless of whether there is a marked crosswalk or not, drivers must also yield to pedestrians when approaching an intersection on a street where the maximum speed limit does not exceed 35 mph.

Spates said the walk/don’t walk signs are supposed to be timed so that when a left-turn green arrow is lit, pedestrians will be warned not to cross. Once the “protected” arrow changes to a solid green light, the sign should change to “cross” (using a white-lighted symbol of someone walking) and drivers should yield.

Crosswalks like the one by Longwood University, Spates said, are different. While also installed and maintained by the town, drivers must come to a full stop.

“When those flashing lights come on, or if a pedestrian is in the crosswalk, they have to stop,” Spates said of drivers coming to those crossings.

He said at least some of these types of crossings are supposed to automatically activate by motion sensors. However, many students and other pedestrians can often be seen manually activating the flashing lights.

“There was some talk before about creating an overhead pedestrian walkway,” Spates said, “but I don’t think students would walk up it.”

Spates also said he’s noticed something at least one Facebook respondent did: More people are walking — and crossing streets — while looking down at their cell- or smartphones.

Spates also took up the question of whether some crossing signs are activating at the right times. Some people have said they can be left standing on the corners of either Main and High streets or Main and Second streets for a long time before finally getting a white signal to cross.

Spates said he would look into that, saying they should be timed with the traffic lights.