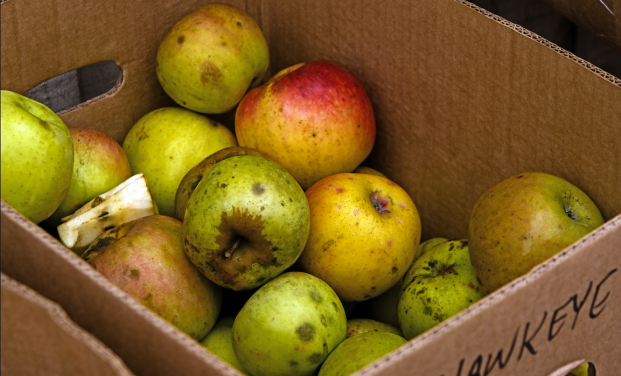 Cynthia Wood Not all heirloom apples are beautiful, but they offer interesting textures and flavors.

When I was a little kid growing up on a local farm, we had a very scraggly looking, old apple tree that was much loved by my dad and grandfather. It bore very small greenish gold apples with rough skin. They weren’t much to look at, but, oh, how sweet and fragrant they were. They were in an old dessert apple that my family called Sweetnin.

We used these apples to make a special dessert called “shirttail” pie. Heaven only knows how that name originated. It was similar to that Appalachian classic, the Apple stack cake. Our version featured layers of sweet biscuit dough baked in 8- to 9-inch rounds and then topped with a plain applesauce made from the Sweetnin apples. There were usually six to eight layers. The completed shirttail pie was covered and placed in the refrigerator for at least a day so that the biscuit layers could soften and absorb the flavors of the applesauce. It was the perfect once a year fall treat.

We tend to take apples for granted. They’re just a regular part of our diet. Apples, however, aren’t native to North America. They were brought here in 1607 when the English settled Jamestown. Apples weren’t initially grown for eating out of hand, but to produce cider and feed livestock. Most weren’t uniformly shaped red orbs. They came in all sorts of lumpy shapes with lots of splotches and spots and ranged in size from less than 2 inches in diameter to about the size of a grapefruit.

Apples were such an important crop, Gov. Berkeley decreed that planters had to grow a quarter acre of apples or other fruit for every 500 acres of land they were granted. By the late 1600s, some planters had large orchards of 2,000 to 10,000 apple trees. Virtually every farmer grew apples and produced cider.

Not surprisingly, the number of apple varieties proliferated. By the early 1900s, there were more than 15,000 varieties of apples being grown in the United States. Over the years, many of these varieties disappeared, but a few morphed into modern stars. The Ralls Genet, for example, probably originated from cuttings given to Jefferson by the French Minister to the United States, Charles Genet. Jefferson passed the cuttings on to Caleb Ralls, a nurseryman who grafted them and spread them throughout Virginia and on into the western territories. The Ralls Genet was especially popular in the Ohio valley because it was a late bloomer that generally wasn’t affected by unexpected spring frosts.

By the 1920s, however, commercial growers had begun to focus on fewer varieties of apples and the Ralls Genet fell out of favor. It was all but forgotten until Japanese orchardists crossed the Ralls Genet with the Red Delicious and produced the apple we now know as the Fuji, currently the third most popular apple in the United States. So, does this make Jefferson the grandfather of the Fuji apple? Perhaps.

We’re coming full circle with apples in Virginia. Cider production is once again popular and many old varieties of apples are being cultivated again. Some cider works are growing as many as 200 different apples — the Albemarle Pippin, Black Gilliflower, Golden Grimes, Hawkeye, Lowland Raspberry, Pumpkin Pound Sweet and many more. Each one has a distinctive flavor profile.

So … try several different varieties of apples during this holiday season, and if you’re feeling adventurous, try making a shirttail pie, an Appalachian stack cake or some other apple dessert that you remember from your childhood. Think about planting an apple tree or vising a local cider works. You’ll be glad you did.

Cynthia Wood is a master gardener who writes two columns for The Farmville Herald. Her email address is Cynthia.crewe23930@gmail.com

You probably saw it growing along the back roads in late summer/early fall. With its tall, dark red stems and... read more