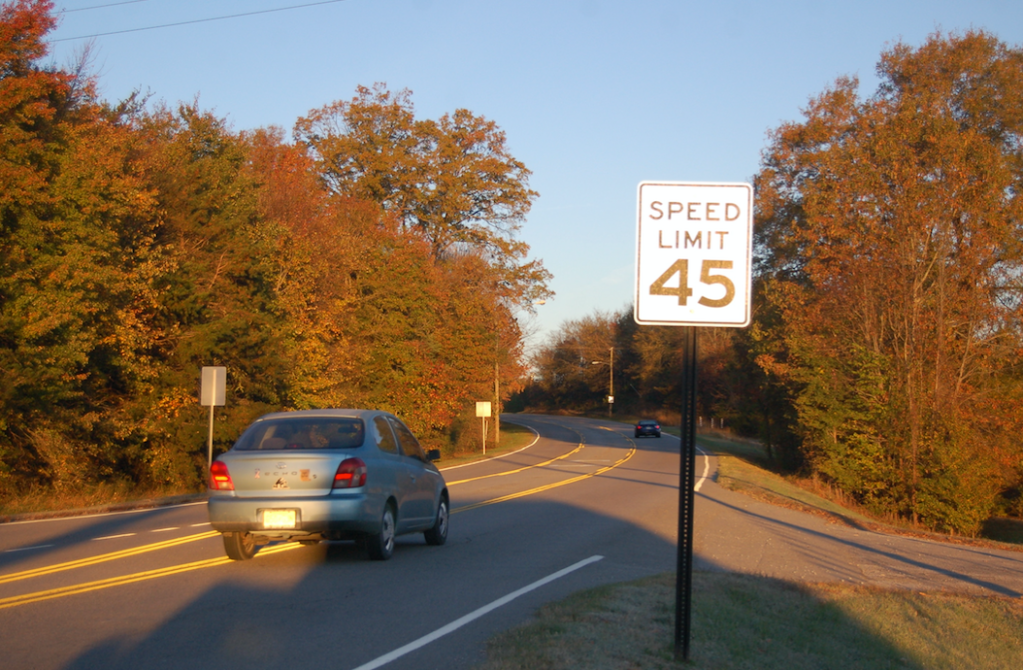 MARTIN L. CAHN | HERALD A speed limit sign marks where West Third Street changes to 45 mph just past the STEPS Center inside of the Farmville town limits. It maintains that speed all the way to the U.S. 15/U.S. 460 interchange, which is in Prince Edward County.

From the center of Farmville at the intersection of Main Street, West Third Street starts at 25 mph, becomes 35 as it passes near the Farmville Historic Train Station, increases to 40 mph between Centra Southside Community Hospital and, finally, becomes 45 mph after it leaves the town limits and heads to the intersection of U.S. routes 15 and 460.

In most cases, speed limits are — and have traditionally been — set by the Virginia Department of Transportation (VDOT). That changed recently.

“There was some legislation in the last two to three years which gave authorities to certain towns and counties to set their own speed limits,” Lynchburg District VDOT spokesperson Paula Jones said.

Farmville is one of those towns.

“Yes, we can do that, but through a public hearing process and under the guidance of VDOT,” Farmville Town Manager Gerry Spates said.

Spates confirmed, depending on which direction and on which street you are driving  speed limits are 25 mph in the heart of downtown, increasing to 35 and 40 or 45 as you head toward town limits.

According to VDOT’s website, Farmville’s speed limits can’t exceed the maximum allowed by the General Assembly for highways under their jurisdictions.

Who set the speed limit for the part of West Third Street outside the town limits? Not Prince Edward County, according to County Administrator Wade Bartlett.

“VDOT sets the speed limits where they own the road, which is all of Prince Edward County,” Bartlett said. “The board of supervisors doesn’t have the authority, although they can request a study by VDOT.”

Bartlett said as far as he knows, Fairfax and Henrico counties are the only ones in the commonwealth which can set their own speed limits.

According to VDOT, speed limits are based on an engineering study that considers various factors affecting the safe and appropriate speed.

“A primary consideration is the speed characteristics, particularly the prevailing (free-flowing) speed, of vehicles on the roadway,” the website explains. “Experience has shown that motorists tend to drive at the speed they perceive as appropriate for the conditions of the roadway, rather than the posted speed limit. Absent undue enforcement, posted speed limits that are set much lower than the prevailing speeds will not be obeyed by motorists.”

An engineering study also considers other factors — the physical characteristics of the road such as geometry, lane and shoulder widths; the nature of traffic on the roadway such as the volume and type of vehicles; the commercial and residential development along the road and the related traffic; pedestrian activity, and the historical number and type of crashes.

VDOT also uses information from law enforcement in the studies.

There are plenty of roads without posted speed limits. VDOT’s website states the speed limit for most business and residential areas is 25 mph, like downtown Farmville. On secondary roads — those with route numbers of 600 and above — speed limits are 45 mph for trucks and 55 mph for other vehicles.

As of July 1, 2014, a maximum speed limit was set of 35 mph for all unpaved roads in the state and does not have to posted.

People who feel a change in speed limit is needed, either up or down, should contact their resident maintenance manager at the local VDOT office. The local VDOT residency office, covering Buckingham, Charlotte, Cumberland and Prince Edward counties, is in Dillwyn, where Scott Shipee is the resident engineer. The phone number is (434) 983-2017

Finally, once you get on any of the interstates running through the commonwealth, you’ll find different speeds there, too.

According to VDOT, while the maximum allowable speed is 70 mph, urban areas’ higher traffic volumes and the number of interchanges dictate lower speeds. In rural areas, where the opposite is the case, speed limits can be set at the 70 mph maximum.