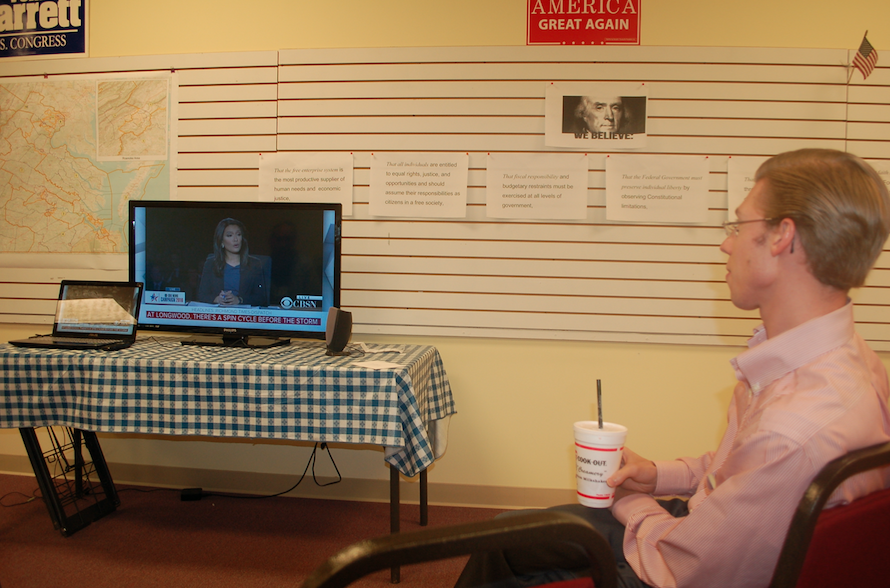 As helicopters circled overhead, Barton was one of five Republicans who sat in a half circle of chairs in the Farmville Republican Victory Center on Tuesday night, supporting Indiana Gov. Mike Pence as he debated Kaine in Longwood University’s Willett Hall.

Barton and fellow GOP members talked about issues, talked back to the television — criticizing Kaine while supporting Pence — and brought up the Benghazi attack, minimum wage and Hillary Clinton’s email scandal. 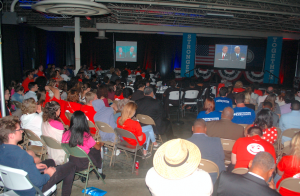 “I think they’re laying out what their running mates have laid out,” Prince Edward County Republican Party Chairman Cindy Koether said. “So, maybe they’re doing a better job of explaining it, but I haven’t heard anything that I didn’t already know yet.”

Koether said she thought Pence was winning “because I think his ideas are better ideas: private-sector jobs, lower taxes.”

She said more government spending is what the country has had for the last eight years.

“I think (Pence is) winning because his ideas are winners,” Koether said.

Daniel Bradshaw, the former party chair, who now works as regional field director for the John Adams for Virginia Attorney General campaign was among the five Republicans on hand.

In contrast, there were about 250 people at the Prince Edward County Democrat’s watch party, including Megan Clark. Speaking on behalf of the party, she had a different view of the debate.

“So far, I guess my concern is always that candidates will hear a question and then they don’t answer the question,” Clark, the county’s Democratic commonwealth’s attorney, said toward the end of the debate. “They go and speak about their agenda. I think that U.S. Sen Kaine has done a very good job of attacking the questions that he has been asked, and attacking the issues.”

Kaine, along with his wife, Ann Holton, and Virginia Gov. Terry McAuliffe and his wife, Dorothy, would later gather at the STEPS Centre as the crowd cheered them on and Secret Service agents stood among them.