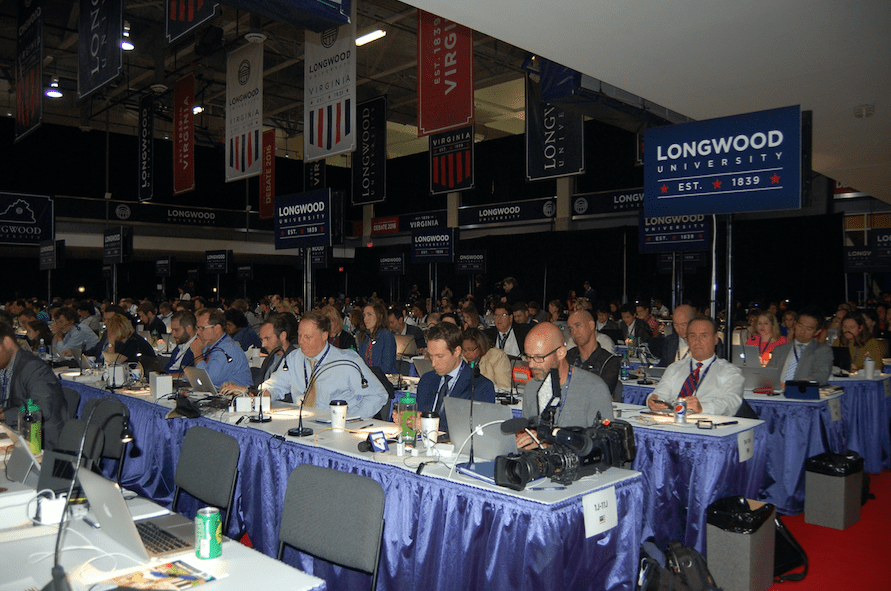 Just before 11 a.m. Tuesday, a smattering of approximately 2,000 credentialed journalists started finding their places in Longwood University’s Health & Fitness Center, which was transformed into the debate Media Center.

Hundreds of tables lined what is normally a basketball court, with another portion blocked off for what’s known as the “Spin Alley,” where campaign representatives tell the media how they believe their candidate performed.

Raised flat screens in the main room allowed reporters and editors to watch the debate. During the day, they were used to follow social media streams using #LongwoodDebate. Some networks also set up their own monitors to use.

Also on hand were hundreds of Longwood student volunteers. Among them was Erin Slaytor, a junior born and raised in Farmville. Slaytor is a history major concentrating on secondary education and minoring in political science. She began working at the center last Friday.

“It’s been interesting to meet all the network people and see all the equipment they’re bringing in,” Slaytor said, “and to hear the questions they have.”

Questions, requests and comments such as how to get across campus, help finding a bed and breakfast to stay in and positive remarks about Farmville’s Main Street.

“People have told me, ‘You should film a movie on Main Street. It’s so beautiful with the architecture,’” Slaytor said. 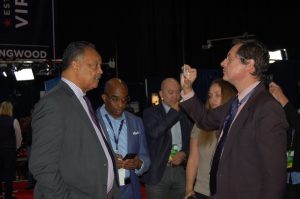 Her primary job Tuesday was to help media and campaign representatives check in and help them to their places. Later in the day, she switched jobs to being an usher in the Debate Hall. On top of that, she won one of the 100 tickets Longwood gave away to stay and watch the debate.

“It’s a big honor to represent the university, especially since I want to be history high school teacher,” Slaytor said. “I’ll be able to tell them I was here.”

As morning turned to afternoon, more reporters arrived most of who said they couldn’t get a real taste of Farmville.

“We only arrived last night and we have to head back tomorrow,” Vladimir Duthier, of CBS News’ free, live streaming service CBSN, said. “We haven’t seen much of Farmville.”

“We came in yesterday, but we have such a long day and our schedule doesn’t allow us time to look around,” said O’Donnell, who — as a veteran reporter having attended numerous debates — also said Longwood’s Media Center was one of the best she’s seen.

O’Donnell, along with many other correspondents, got the chance to interview or participate in mini press conferences involving people like Tim Kaine’s senior spokesperson and communications director, Karen Finney, and long-time civil rights activist and one-time presidential candidate the Rev. Jesse Jackson.

Jackson told The Farmville Herald his feelings about the town hosting the debate in light of its history.

“The fact that we can hold the debate here in an international, multi-cultural, multi-racial city is a sign of good news for Farmville,” Jackson told The Farmville Herald. “America must, as Farmville has, embrace its future … one nation under God.”

Fifty years ago, he said, Farmville could not have hosted the debate.

“Because of hostilities, there were protests that were not embraced. Farmville has (since) seen the value of the center of America. It’s morally right … and can become the Farmville of our dreams.”

The debate also reached a global audience. For example, Yingshan Shi came from Washington, D.C., to file reports for the Beijing, China-based Xinhua News Agecny. She and her technician used a smartphone to live stream their reports via Facebook to millions of viewers in China and around the world.

The Media Center fell silent and stayed quiet once the debate started at 9 p.m. Ninety minutes later, however, most correspondents rushed into the Spin Room in the — unrealized — hope either candidate would appear.

Fairly soon, though, even the Spin Room calmed down and finally emptied out, the debate over. Longwood officials said the center would still be open Wednesday as some networks planned to continue some level of coverage the morning after the debate.