Some visitors in town for Tuesday’s Vice Presidential Debate became better acquainted with Farmville and its character thanks to the efforts of someone with an abiding love for both.

A group of approximately 50 healthcare workers supporting Hillary Clinton for president visited town, holding a debate watch in a banquet room at Charleys Waterfront Café. Among them: Charles Carter, of Richmond, who organized the trip.

“I grew up in Farmville,” Carter said. “I am the one that decided to put this together and bring everybody here because I wanted them to learn about this town.”

He expressed his deepest admiration for the people of Farmville because he said it is a town of fighters. 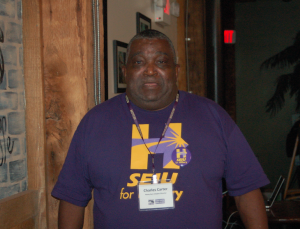 “They don’t give up,” Carter said. “Even through all the struggles that have gone on here, these people still fight.”

In addition to the group holding up signs and campaigning for Clinton, he arranged for the group to go on a tour of Robert Russa Moton Museum.

“I was able to show people what we had to go through to get an education,” he said. “That’s why I said that this town is a town of fighters.”

Florine Wheeler, of Petersburg, who was part of the group, was moved by her visit to the town.

“The history part — we went to the (Moton) Museum, and yeah, I was kind of choked up,” she said. “I’ve been to Farmville (some) times before, but not on a historical tour. So, today was great, really great.”

The story of Farmville’s healing, which Carter said is still underway, is a story that needs to be told.

“And this is the time to tell it because it has to do with what’s going on here now, with these debates, with this upcoming election,” Carter said, adding that the election presents voters with the choice of going down a path of unity or division.

Many in the group wore purple shirts with yellow print reading “SEIU for Hillary.” SEIU is the Service Employees International Union. 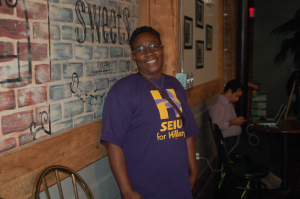 Carter serves on the executive board for the Home Care chapter of SEIU Virginia 512. According to the organization’s website, the chapter is an active group of more than 500 home care providers, consumers and advocates that fights for dignity, respect and quality care for older adults and people with disabilities, as well as quality jobs for their home care providers.

“My wife died 10 years ago, but I’m still fighting for other people,” he said. “I’m not going to stop until everybody has justice, and that’s what I learned here in Farmville — you cannot stop until there’s justice. I’m proud to be from here.”

He said the town did a great job preparing for the debate, a sentiment echoed by Wheeler.

“I think it was good,” she said. “I really do, because everybody got to sort of have their say, and nobody got a little out of line, so that was good.”

Though Farmville has changed in important ways, Carter also relishes the way it has stayed the same in his return visits.

“It’s still a little, rustic, country town, and that’s the part I like about it,” he said. “As I come down the hill of Third Street, I start smiling. I’m at home.”