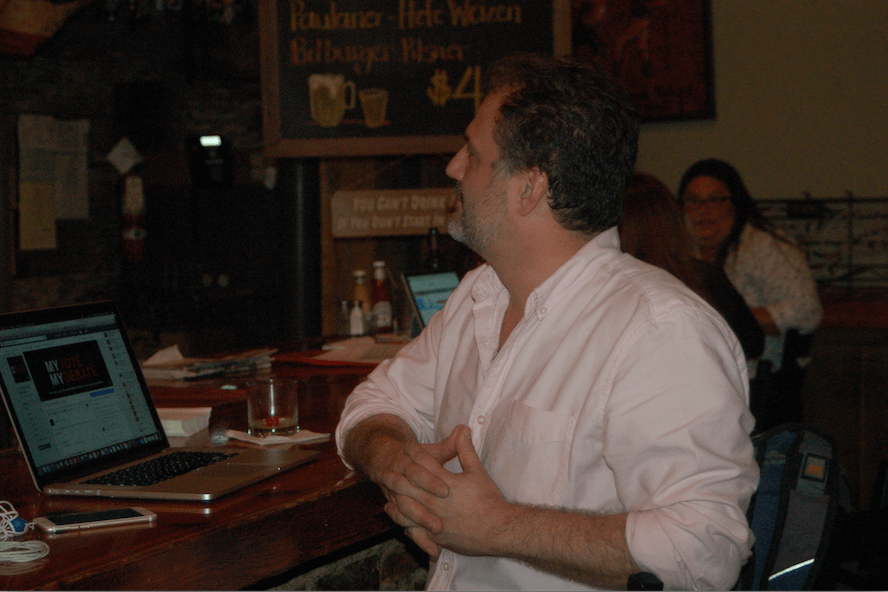 Chris Magid sat at Charleys Waterfront Café on Tuesday evening, watching the U.S. Vice Presidential Debate on television as he worked on his laptop sitting on the bar in front of him.

A resident of Dallas, Texas, he was a long way from home, but it was the people of Farmville that brought him to town, specifically Longwood University students.

Magid works for My Vote My Debate, an organization working to open up presidential debates to third-party candidates.

“I’ve been lots of places, and it’s kind of rare you run across a place as special as Farmville,” Magid said. “I think the community here is excellent because there is a sense of community. I think the students on the campus are engaged superstars.”

He said My Vote My Debate supports people who are already acting on their own.

“We saw that the students on the campus of Longwood University were getting engaged in the process and fighting for something they believed in, and it so happens that we believe in the same thing,” he said.

Magid said that if a candidate can get on enough ballots to win 270 electoral votes, the country has a right to hear them.

“This year, there are only four candidates that can win the 270 electoral votes, so it doesn’t make it an unmanageable process to just listen,” Magid said.

In addition to Hillary Clinton and Donald Trump, he was talking about Gary Johnson and Jill Stein. If debates were opened to these candidates, Tim Kaine and Mike Pence would have been joined at Longwood by Johnson’s running mate, Bill Weld, and Stein’s running mate, Ajamu Baraka.

Though he wished Tuesday’s debate featured more candidates, he said he was pleased with how it was going as he watched at Charleys.

“This is a much better debate than the presidential debate,” he said. “And in a year when the country is more dissatisfied by candidates that are more disliked than ever before, I would take either of these guys over the top of the ticket.”

Like-minded Longwood students brought Magid to town, but as he spent time in Farmville, he began to gain a significant appreciation for other aspects of it, like the kindness of its people and the real sense of community it has.

He said he was hanging out at Uptown Coffee Café when he noticed that appreciation was catching on among other newcomers.

“There are so many visitors from out of town for this,” he said. “You would not believe how many people from (Washington) D.C., New York, Dallas, California, exposed to this town and area for the first time, actually started talking to the real estate agent next door.”

And this was an easy instinct for Magid to understand.

“I love it here,” he said. “I’m seriously thinking about moving here.”

He had been exchanging comments about the debate with a fellow debate-watcher sitting nearby at Charleys, Diane Gunter, of Amelia.

Gunter said she came to Charleys because it represented a place outside of the fray but one where she could watch the debate “and probably be around people who are still interested in it.”

Her engagement in debate-related activities reached a level higher than most when she was interviewed by one of the visiting media outlets. At the time, Gunter said the Huffington Post might quote her and, indeed, she was.

She had a decidedly positive take on how the town and Longwood’s engagement in debate prep made for a day with minimal inconvenience to people moving about the area.