Young Dukes aim for growth on the links 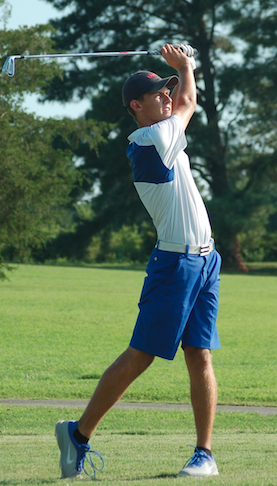 The Cumberland County High School golf team features proven veterans who can make runs in the postseason and inexperienced players who are brand new to the game.

Dukes Head Coach Monroe Preston is optimistic about what his team will be able to do this season.

“I think we’re going to do pretty good,” he said. “I’ll see where we’re at about mid-season. I think we will get better and (I’m) just looking to see what we can do in the conference.”

Opening the 2016 season Thursday, the Dukes shot 215 during a nine-hole round at Farmville Municipal Golf Course, coming in third behind Nottoway High School at 187 and Bluestone High School at 192.

“I’d like to see us around 200 midseason,” Preston said. “And to be competitive (in the conference) … I think we’ll have to shoot somewhere under 180.”

Thursday’s competition represented the first tri-match that counted that Cumberland senior Wyatt Long and sophomore Justin Long had ever played in.

“I thought they looked pretty good when I was able to look at their swing,” Preston said, adding there were things he can work on with them. “I think we can get better.”

The Longs — including freshman Jason Long, who did not play Thursday — are new to golf as of about four weeks ago, but Preston expects to help all of them build up their experience and abilities.

He has a proven track record of making Cumberland competitive on the team and individual levels. The Dukes’ performance last year is a prime example.

Those players were Chase Grubbs, Dustin Clark and Coleman Phillips.

Phillips, now a graduate, is the only team member Cumberland has lost from the 2015 Dukes.

Seven players populate the roster this year, including three seniors, three sophomores and one freshman.

Grubbs is the team’s clear No. 1 player, and Preston said what accounts for this is the senior’s experience.

“I think that’s going to go a long way this year,” the coach said. “He’s been there before, and I see the maturity showing, so I’m looking for good things out of him.”

Grubbs has made it to the state tournament as a junior and as a freshman and also won the Conference 42 tournament last year.

“This year, I’m hoping to play well at conference, make it through regionals and have two good days at states,” Grubbs said.

Preston said there will be pressure on everyone to lower their scores. He is particularly depending on a drop from Clark, a senior.

“I’m looking for him to sort of take some of the load off of Chase,” Preston said.

Several players on the team could qualify as up-

“He’s got a nice swing, so he could come along,” the coach said, also praising sophomore Tyler Kinsley: “He’s got some swing flaws that we need to work on, but he works on it, and he puts in a good effort.”

The Dukes continued their regular season schedule Tuesday on the road against Buckingham High School and Nottoway. They play their third tri-match of the season at 3:30 p.m. Thursday against Central Lunenburg High School and Randolph-Henry High School at Lunenburg Country Club.