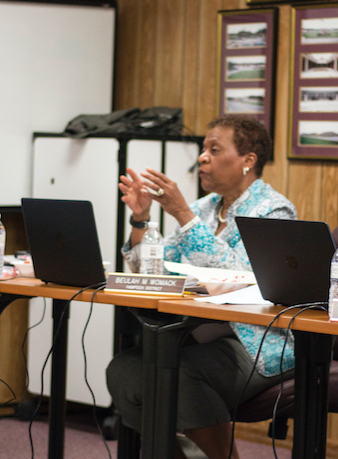 The appointment came during the board’s regular meeting Wednesday after the board’s split 3-3 vote, cast in July, between Womack and Prospect District representative Darin Thomas.

The position remained vacant for the past month after the appointment was tabled until the board’s August meeting.

Before voting Wednesday on the vice chairman position, Thomas withdrew his name from consideration.

“I don’t want to contribute to anymore dysfunction that this board has,” he said.

Throughout the July meeting, Dr. Wilkie Chaffin, newly appointed Buffalo District Representative, abstained from voting for the new chairman and vice chairman, citing his first meeting as a school board member. In addition, Lockett District representative Dr. Chapman Hood Frazier was absent, leaving the remaining six members at a deadlock.

The decision to table the appointment in July came after recently hired Division Superintendent Dr. Barbara Johnson conferred with the board’s legal counsel, Craig Wood. The board agreed that by August Chaffin may not feel obliged to abstain and Frazier would be in attendance to cast his vote.

All members were in attendance Wednesday and Chaffin participated in voting.

Womack will join Farmville District representative Sherry Honeycutt in leading the board board during this year. After a split vote and the concession of Dr. Timothy W. Corbett Sr., who represents the Leigh District, Honeycutt was named chairman in July.

Corbett cited the cohesiveness of the board as his reason to withdraw.

During Wednesday’s meeting, the board named School Board Clerk Melanie Adams as the Freedom of Information Act officer.

Adams will respond to FOIA requests submitted to the school board and the superintendent.

The board will participate in its annual retreat on Saturday, Sept. 10. During the retreat, the board is set to lay the groundwork for the school year, setting priorities and establishing correct procedures for meetings.