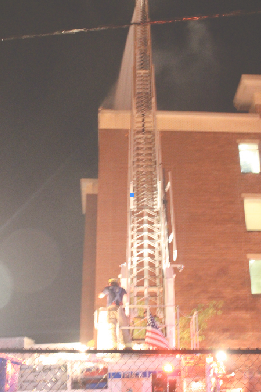 DAN PEMPEL A Farmville Volunteer Fire Department crew shoots water down onto the top of the Longwood Landings Northeast building on Monday night following a fire thought to have been started by a lightning strike. Officials evacuated 60 Longwood University students from the building, which also houses Barnes & Noble on the ground floor. Crews had the fire out by 11 p.m., according to a Longwood-issued notice.

Longwood University evacuated 60 students from the Longwood Landings Northeast apartment building off South Main Street just after 9 p.m. Monday due to a fire believed to have been started by a lightning strike. The building also houses Barnes & Noble on the ground floor.

A Longwood alert identified the structure as the Southeast building; a map on the university’s website identifies the building with Barnes & Noble as “LLNE,” with NE standing for Northeast.

Fierce thunderstorms brought multiple lightning strikes in and around Farmville, during which one strike is thought to have struck somewhere near or on the roof at the building’s north end.

Goss said students were evacuated first. Next, crews attacked the fire, using an FVFD ladder truck. Firefighters extended the ladder well above the roof line and shot a heavy stream of water down onto the building.

By 10 p.m., dozens of firefighters combed through the building, looking for hot spots.

“They are making sure the fire hasn’t extended through the multiple layers of the roof,” Goss explained.

The fact the building’s fire alarm system did not go off is one of the reasons Goss said he believes lightning started the fire.

“We think a lightning strike fried the … system,” he said.

Longwood University Communications and Media Relations Director Matt McWilliams said officials started on the fourth floor to evacuate the building — which he said can house more than 400 students — and worked their way down.

He said the Farmville Police Department were first on the scene.

As of Monday night, McWilliams said he did not know how many units were directly affected by the fire and had no preliminary estimate of damage costs.

The university issued a notice just before 11 p.m. saying crews had extinguished the fire at the Northeast building. Longwood also said the Office of Student Affairs’ residential and commuter services department is working with affected students.