RACE STREET BAPTIST CHURCH A rendering of what the outside of Race Street Baptist Church will look like after renovations, which are planned to be completed by early October.

Originally founded in 1894 along its namesake near where Longwood University’s library and newly constructed dorms now stand, Race Street Baptist Church has undergone many changes. Those changes include its move from Race Street to its current location on the corner of Franklin and Hill streets in 1967.

The move, believed to be in response to Longwood’s expansion and use of eminent domain, according to Race Baptist Church Pastor Dr. James Taylor, was the first major change made to the historic church.

Six years after Taylor became pastor in 1991, the church began a three-phase renovation of its Franklin-Hill building, beginning with a large addition to the rear of the church, where classrooms and more baptistries were planned. 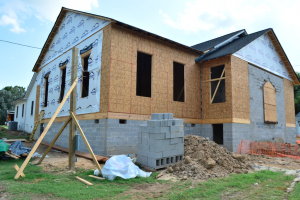 HALLE PARKER | HERALD
Race Street Baptist Church, at the corner of Franklin Street and Griffin Boulevard, is in the second part of a three-phase expansion, which includes 80 more seats for parishioners.

In June, the church broke ground on the second phase of its expansion. Taylor said the church has completely stripped the inside of the main area, planning to redo utility units, pews and add on to the building among other changes. The work will add 80 more seats for what Taylor said is the church’s “growing congregation.”

“Over the years, we’ve certainly been a struggling church,” he said, explaining the renovation is a large financial undertaking for the church of several hundred thousand dollars. “We’ve experienced growth, spiritual growth, in so many areas so then these things would happen.”

According to Taylor, the effort to generate enough funds to take on the project was shared by the congregation through tithing as its membership increased.

“Our members have generously moved into a new dimension, I believe, in terms of giving,” the pastor said, describing the building fund campaign as “very active,” but adding, “we are not working on an unlimited budget.”

He said gaining bank support was assisted by the church’s “longstanding religious presence in the Farmville community.”

Having been a part of Farmville for more than 100 years, Taylor said the church has no plans of expanding out of the town.

“We feel it’s very important for our ministries and voices to be heard by the township, and we are a very integral part of the community,” he said.

As part of a nationwide study, civil rights activist W.E.B. Dubois observed African-American life in Farmville in 1898. Dubois noted Race Street’s congregation in addition to First Baptist and United Methodist churches, commenting on the role church played in the community.

Its past with the town assisted in establishing a strong relationship with the Moton Museum, especially since some members of the congregation attended classes at the former school as children. Their historical connection with the museum played a role in Moton allowing Race Street Baptist to host some of its services in the building while the renovation goes on.

According to Moton Museum Director of Education and Public Programs Justin Reid, many Race Street members who attended Moton as children still play an active and “instrumental” role in organizing some of the museum’s monthly events.

Reid said hosting the church temporarily has allowed two historic Farmville landmarks to continue strengthening its relationship as they begin a new research project with the assistance of the church and Longwood.

“In the coming years, Moton is really interested in working with Longwood and Race Street Baptist Church in recovering the history of the original Race Street building,” said Reid.

The project is called a “community research initiative,” and the director said he “definitely envisions the relationship getting closer as the research continues to develop.”

Both Taylor and Reid said the paned windows from Race Streets’ building would be featured in the museum as part of the initiative. Reid, who has a personal connection with the church, said the windows were from the original building.

“My great-grandfather was a pastor for Race Street. It’s not my home church, but I’ve visited and it’s really important to my family,” said Reid. “I think (the renovation) is incredible. Race Street is one of the largest congregations.”

Taylor said the church plans to have the renovation finished by early October.

The Friends of the Appomattox River (FAR) recently enjoyed a “moonlight paddle” on Sandy River Reservoir. Embarking on the lake... read more