A community-policing forum held July 28 in the Farmville Town Council meeting chamber included discussions about the use of body cameras, racial profiling, and other topics. A Q&A session followed a memorial service held outside the Prince Edward County Courthouse. The service honored both alleged victims of police shootings and officers who’ve fallen victim to recent attacks across the country.

The first question of the Q&A session focused on body cameras.

Longwood University Police Chief Bob Beach said his officers have been wearing body cameras for more than two and a half years.

“Our goal is to be transparent, to be as transparent as we possibly can,” he said. “I want you, as I want every citizen of Farmville and every one of our students to feel like they can come forward with any question or concern and get an honest and a clear answer.”

Prince Edward County Sheriff Wesley Reed said when body cameras were first introduced, he decided not get them.

Acting Farmville Police Chief A.Q. “Andy” Ellington said his officers starting using body cameras more than eight years ago. Virginia State Police Trooper and Recruiter Gregory Henshaw said with seven divisions, not including headquarters staff, the agency would have to provide body cameras to more than 2,000 troopers. That’s something he said the agency can’t afford, but is researching pilot programs. Hampden-Syndney College Police Chief Scott Williams said he hoped to get a shared body camera in the future. 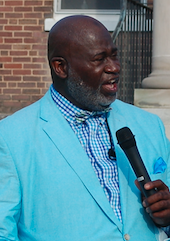 JORDAN MILES | HERALD
Khalil W. Latif, a criminal defense attorney, speaks during the memorial service about diversity in the community.

Beach responded to a question regarding diversity and cultural training.

“Every (police) academy in the state of Virginia requires a significant level of diversity and cultural training in their basic academy and it’s mandatory that you go over that again every year,” Beach said.

“In order for us to understand our community, it’s great to have a diverse police department,” Williams added.

“Our job is, when we do find it, to address it, is to hold people accountable and make sure they’re doing the right thing, even if it means putting a black eye on the situation that they’re doing something wrong, we can address that,” Johnson said.

Beach encouraged citizens to bring concerns to police, but also to give agencies time to gather facts and “do it right” when it comes to such investigations.

Khalil W. Latif, a Farmville-based criminal defense attorney, who identified himself as a Muslim, spoke during the memorial service.

“For us to be the model community, given our diversity, we have every matter of faith that’s represented in this community, including myself,” he said. “We have law enforcement officers that live in the community with us, amongst us … I will tell you from where I stand as a criminal defense attorney, by comparison to even the other counties … we’re somewhat fortunate in that we have the law enforcement officers that we have here.”