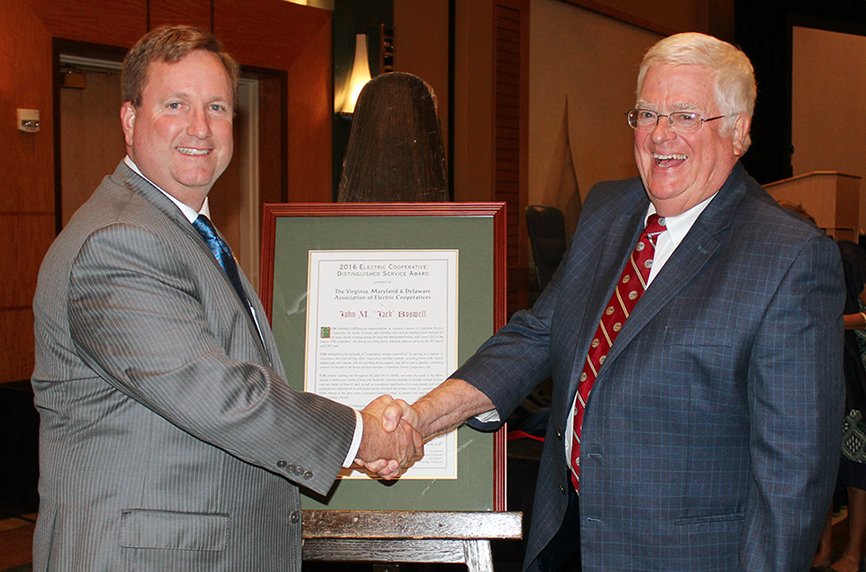 The Virginia, Maryland & Delaware Association of Electric Cooperatives (VMDAEC) recently honored John M. “Jack” Boswell has been honored for his 39 years of service to Southside Electric Cooperative (SEC), and his many contributions to the development of rural electrification. Boswell, a Hampden-Sydney College graduate who served as legal counsel for SEC from 1976 through 2015, received the 2016 Electric Cooperative Distinguished Service Award at VMDAEC’s annual meeting on July 25 in Cambridge, Md.

Created in 1993, the award recognizes individuals who have served an electric cooperative in an outstanding manner for an extended length of time.

“Working for member-owned cooperatives is one of the greatest things you can do as an attorney,” Boswell said in his acceptance speech. “It’s been a real joy to watch the cooperative improve and grow. We went from nominating committees to petitions, and from having 10 districts to three, each with three directors. These changes mean that any co-op member who wants to run for SEC’s board has an opportunity to do so every year.”

Boswell said he was especially proud of his role in helping SEC achieve a greater degree of transparency in everything it does.

“Our goal was to answer our members’ questions before they asked them, and last year, we succeeded because no one had any!”

SEC President & CEO Jeff Edwards said. “Jack has served the members, board and management of SEC with the highest level of professionalism and dignity for 39 years. His sound legal counsel helped SEC navigate troubled waters many times in our history, and his negotiation skills resulted in the success SEC enjoyed when encountering difficult situations.”

A Nottoway County native, Boswell earned his law degree from the University of Richmond after graduating from Hampden-Sydney. After completing law school, Boswell returned to Crewe and partnered with Lynwood H. Wilson in 1969. After Wilson’s retirement, he partnered with J. Larry Williamson to form Boswell & Williamson in 1976. Although retired from SEC, Boswell continues to practice law in Crewe and work on the family farm, Sunny Slope Orchards, on the Nottoway/Prince Edward county line.