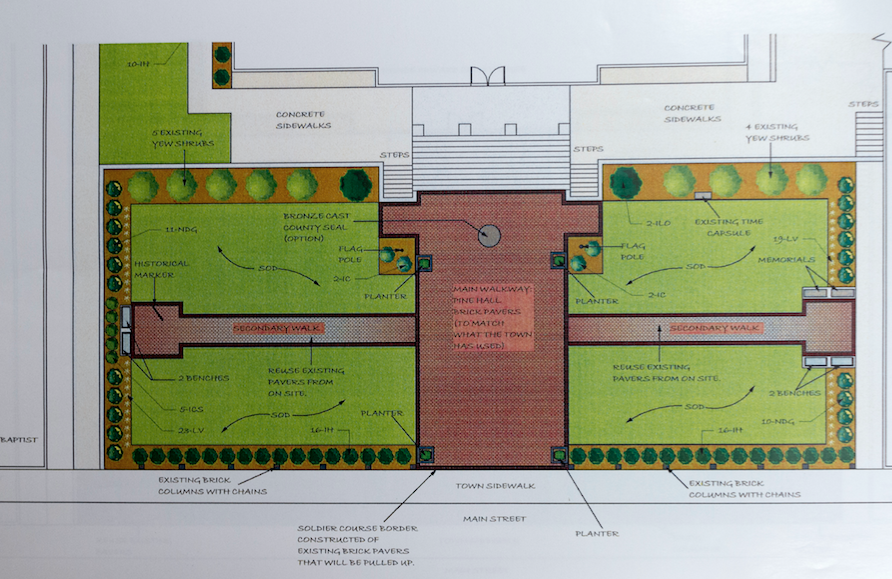 The designs were produced by the Lynchburg-based Land Tech Group. The board agreed in April to hire the company; Land Tech presented the two plans during the board’s June 14 regular meeting.

According to Bartlett, supervisors have yet to reach an agreement about which modifications they would like to see on the lawn. Supervisors agreed to hold off on making a decision until they have more information being generated by a security evaluation of the courthouse.

The security review could suggest the courthouse’s front door remain locked. In this case, supervisors said they would like to see the design altered so pathways do not lead courthouse guests to a locked door. The board also suggested this could also help cut the project’s costs. 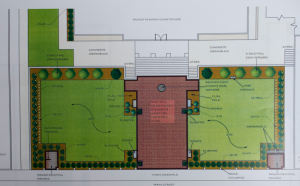 According to the second plan, without the addition of secondary pathways, the marker and memorials would be moved closer to Main Street, making it easier for pedestrians to read the signs.

During Tuesday’s meeting, supervisors will reconsider the two designs. Bartlett said the security evaluation has still not been finalized.

“I don’t know if they will reach a decision or not,” Bartlett said, adding he hopes to see a decision made. 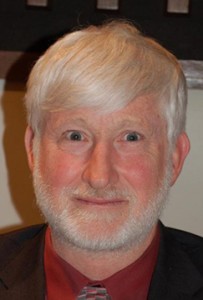 One plan shows secondary sidewalks leading from the wider main path across the lawn areas, parallel to Main Street. The other depicts the lawn staying similar to how it appears now, with left and right courtyard areas surrounding the brick-paved path to the courthouse front door.

In both designs, Land Tech suggested the addition of benches. However, the first design features benches prominently placed at the end of the secondary walkways. Also at the end of the walkways would be the Light of Reconciliation marker and granite memorials that currently exist on the lawn.

According to the second plan, without the addition of secondary pathways, the marker and memorials would be moved closer to Main Street, making it easier for pedestrians to read the signs.

In both cases the pathway leading from Main street to the courthouse would be re-paved with brick pavers to match those used by the town of Farmville. The current pavers would be recycled in each design. They would either be used to pave the secondary walkways or, in the second plan, laid on their sides as a border to the main walkway. Both plans include an embedded bronze-cast county seal in the main path.

Bartlett said once the board decides on a plan, the project “could be done within a month, approximately.”

The next step would then be to open the project up for bids, he said.

While Land Tech has the capacity to complete the project, “they cannot do that now because they are now booked past October,” Bartlett said. “We’ll just have to get another contractor.”

He said the board has not yet established a budget for the project.