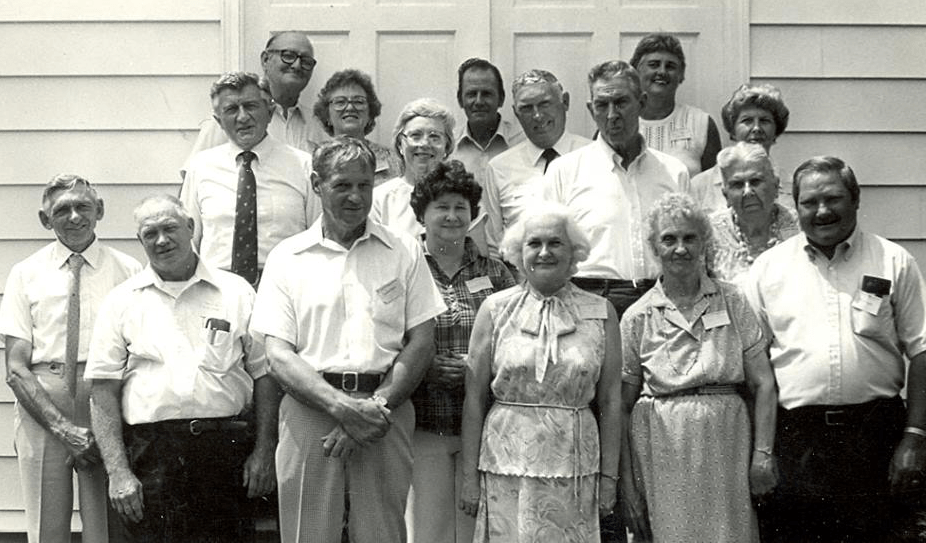 Allen cousins meet for the 1982 family reunion at Douglas Presbyterian Church. These are third and fourth generation descendants of Joseph and Letitia Allen.

The 73rd consecutive Allen Family Reunion will be held at Douglas Presbyterian Church, Prince Edward County, on Sunday. The Allen family of Prince Edward and Cumberland counties is descended from James Anderson Allen Sr. and his wife, Elizabeth Sims Allen.

Their children, including James Jr., Charles, Richard, Benjamin and Daniel, settled in the area in the mid-1700s.

The first gathering of the family was held in 1912 at “Woodland,” the home of Mollie Allen Bell and her husband, Nathan, in western Prince Edward County.

The Prince Edward Allens, descended from Joseph Watson and Letitia McDearmon Allen of “Rosebower,” met sporadically until 1943 when the reunion became a yearly event.

It became a tradition for the reunion to be held at Presbyterian churches in the county including Lanes Chapel (in the Felden neighborhood), Douglas, Davis Memorial (at Prospect) and College Church at Hampden-Sydney.

Those wishing to attend the service at 10 a.m. and worship with the Douglas congregation may do so.

After the service, the Allen family and friends will meet in the church’s fellowship hall for lunch and a business meeting at noon. Please bring covered dishes to share.