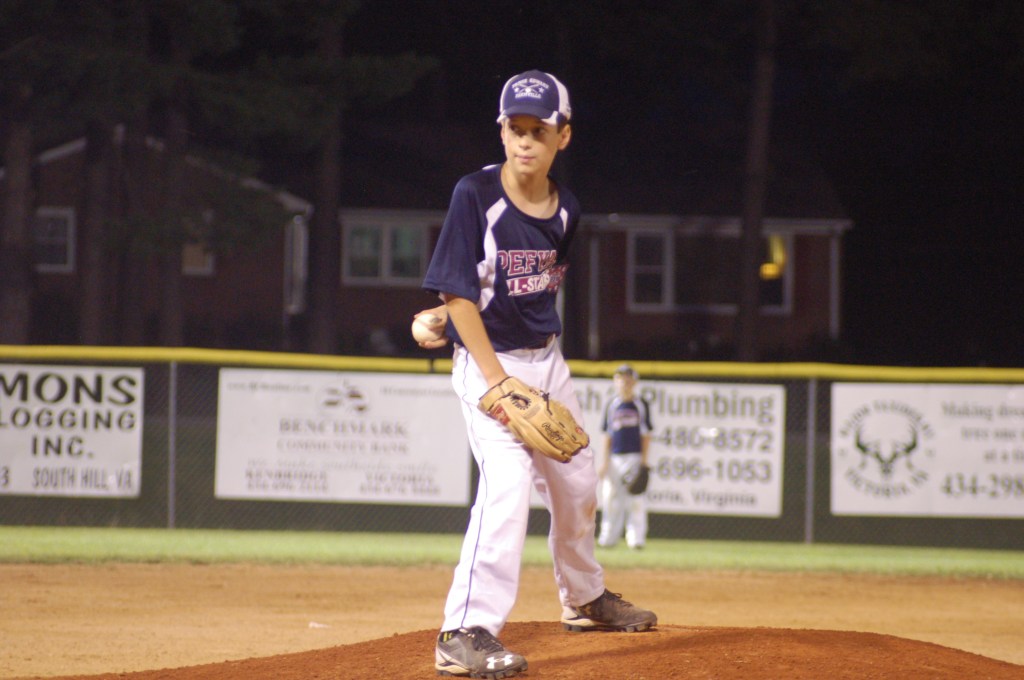 TITUS MOHLER | HERALD PEFYA All-Star Noah Boehmer gets ready for his next pitch against the Dinwiddie National All-Stars on Tuesday during the Dixie Youth District 5 Minor League All-Star Tournament in Victoria.

The Prince Edward-Farmville Youth Association (PEFYA) All-Star baseball team was eliminated Tuesday night from the Dixie Youth District 5 Minor League All-Star Tournament, but it put up a fight at Lenhart Field worth remembering.

The boys were facing a Dinwiddie National All-Star team that has been blitzing its way through the competition. Though the talented squad remained undefeated on Tuesday, its victory over PEFYA was no blowout.

“Dinwiddie — they’ve brought it to every other team, winning 24-2, 20-6, and tonight we showed up and they got 12-9 with the bases loaded in the bottom of the sixth and two outs, so I think we had an awesome showing,” PEFYA Manager Dave Furlong said. “It was a battle between both teams, and it was just a phenomenal baseball game.”

After Dinwiddie took a 2-0 lead in the first inning, PEFYA responded in the second, taking a 3-2 lead. Dinwiddie came back with three runs in the third, but PEFYA responded with four in the bottom of the inning to go up 7-5.

Following a delay due to lightning, PEFYA boys added on a run in the fourth. The Dinwiddie National All-Stars rallied in the top of the fifth to go up 10-8. PEFYA made it a one-run game going into the sixth inning but could not add any after that.

Dinwiddie was able to score twice in the sixth to finish on top 12-9.

PEFYA ended up with a 1-2 record in the tournament.