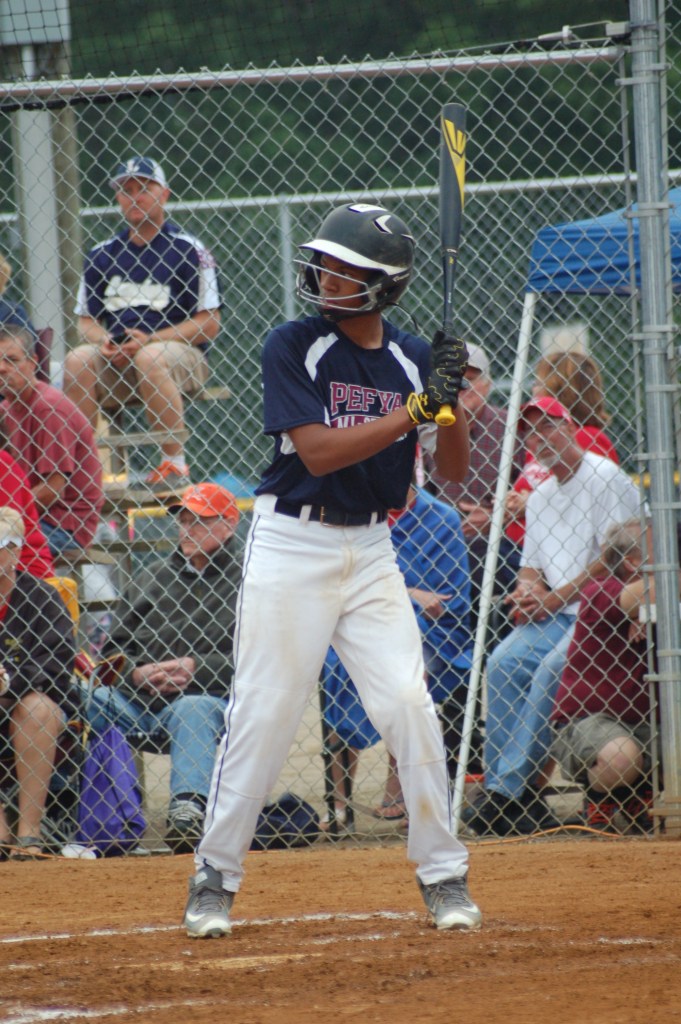 Michael Dailey, of the Prince Edward-Farmville Youth Association All-Stars, made key contributions both on offense and defense to his team’s 2-2 run in the Dixie Youth District 5 Major League All-Star Tournament in Blackstone. (Photo by Titus Mohler)

The championship game of the Dixie Youth District 5 Major League All-Star Tournament on Tuesday in Blackstone was one of big hits by both teams.

The contest seemed to be going the way of the Prince Edward-Farmville Youth Association (PEFYA) All-Stars, as they led 6-0 through two-and-a-half innings. But the undefeated Dinwiddie National All-Stars came roaring back and ultimately prevailed 8-7 to claim the title and punch their ticket to the state tournament.

“It was a hard pill to swallow,” PEFYA Manager Mark Simon said of the loss. “The kids played their hearts out, though.”

His team’s only prior loss in the tourney came at the hands of the same Dinwiddie team on Sunday, so PEFYA needed to win Tuesday and a rematch on Wednesday to claim the district title and advance.

Things were going according to plan in the first inning on Tuesday when Michael Dailey gave his team a 2-0 lead with a two-run homer. 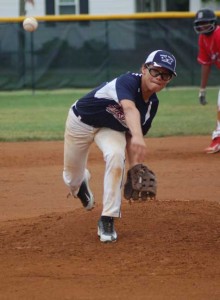 Nate Reed made the lead 6-0 when he hit a grand slam in the top of the third.

But it was in the bottom of the third inning when Dinwiddie National scored all eight of its runs.

PEFYA got two outs on Dinwiddie with the score still 6-2 but could not put the inning away, giving up, among other hits, a grand slam.

Dailey got the start on the mound and pitched well through 2.2 innings, throwing five strikeouts, but he ran into trouble in the third.

“Being a former pitcher myself, my No. 1 goal is to protect these kids’ arms,” Simon said. “(Dailey) was out there for too long and threw too many pitches, even though he was doing a phenomenal job and he just didn’t quite get the help he needed behind him in the field.”

Simon made the decision to bring Jake Simon in at that point, just one out earlier than he had planned.

“Jake came in with the bases loaded and two outs, and he struck the kid out, and then he went on to pitch two more scoreless innings in which he did a great job,” the manager said, as Simon threw four strikeouts in 2.1 innings.

Part of Dinwiddie’s formidable lineup is JaQuan Tucker, who won the batting championship with a .667 batting average, but Simon was able to hold him in check.

“He got out the heart of their order and shut them down, and we just couldn’t quite score enough runs to come back,” Manager Simon said.

PEFYA had some opportunities to come back in the top of the sixth and final inning.

“With Michael Dailey on base and Austyn Jamerson at the plate, and he hit about a 300-foot ball down the line that might have been foul by two feet,” the manager said. “I personally thought it was fair, but the umpire disagreed with me, and a foul ball was called. That would have tied the game.”

With two outs, PEFYA came within one run of tying when Michael Seward batted in Dailey, but the final out of the game came shortly thereafter.

“That’s an excellent Dinwiddie team that we went up against,” Simon said.

Blackstone has received an automatic berth in the state tourney because it is hosting it, and since Blackstone is from District 5, only one berth was up for grabs in the district tourney, meaning the PEFYA Majors are done for this year.

“I feel terrible about the way things ended, but those kids have got a lot of good years of baseball ahead of them,” Simon said.