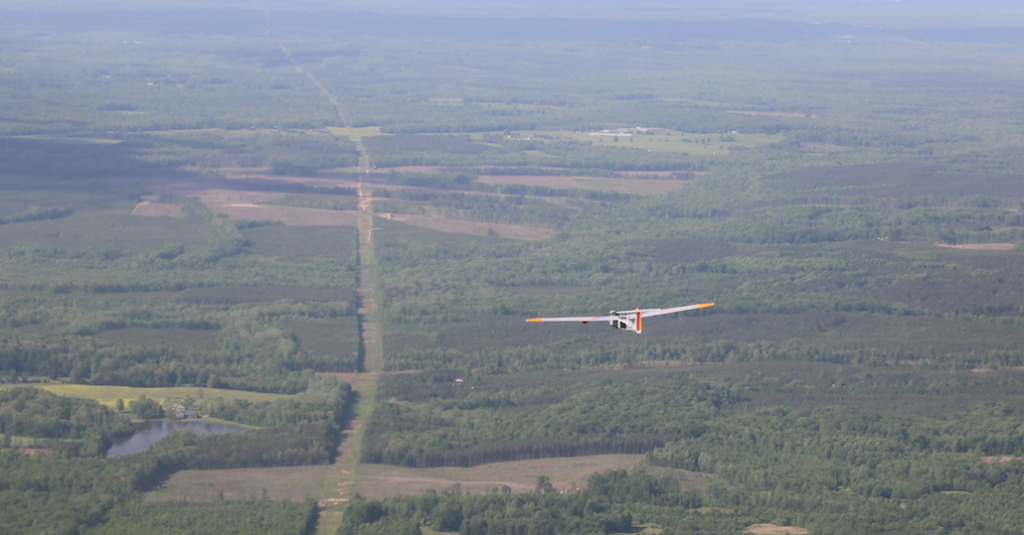 After leaving the Farmville Regional Airport, an RS-20 unmanned aircraft flies over a pipeline route near the town. (Photo by American Aerospace Technologies)

Unmanned aircraft systems — commonly known as drones — weighing up to 160 pounds with a 12-foot wingspan were tested at the Farmville Regional Airport this week, led by Virginia Tech’s Mid-Atlantic Aviation Partnership (MAAP) in collaboration with American Aerospace Technologies Inc. (AATI).

Virginia Tech’s MAAP is one of six sites approved by the Federal Aviation Administration (FAA) to further develop and integrate drones into the National Airspace System, the overarching network of airspace used and shared by all aircrafts regulated by the FAA.

“The thing that we’re trying to do, in order to make them look more like traditional aircrafts, we need airport facilities access to learn how to integrate those systems unmanned aircrafts safely so they can learn to benefit other things that may affect people’s everyday lives,” said MAAP Associate Director Mark Blanks.

Drones are defined as unmanned aircraft systems, meaning they do not have a pilot and are controlled during flight remotely, according to the FAA. The lack of a pilot can allow the drone to perform tasks potentially too risky for planes with people to complete.

As a public-use airport, the Farmville Regional Airport provides space for general aviation use within Virginia, fitting the purpose of MAAP’s drone research, according to Blanks.

“It’s the best location for what we do. Farmville has a long history with unmanned aircraft operations dating back about a decade or so with other aircrafts,” said Blanks.

The rural environment surrounding the site, as well as the proximity of key infrastructure, such as power lines and pipelines and airport accommodations were factors in choosing the Farmville Regional Airport as one of the testing sites for larger drones, according to Blanks.

According to Blanks, MAAP has conducted about four tests from Farmville’s airport, and plans to continue their use in the future as the FAA authorized long-term use of the site as well as a few others across the state; they first came during the spring, performing tests May 10-13.

“As long as we’re welcome, we hope to build the relationship. And it can bring some positive benefits to the Farmville airport, especially being on the leading edge of this kind of research as well as economic benefits with additional crew and team members out there that would not necessarily have come to the city,” said Blanks, adding the team does not interfere with manned aircraft traffic and works to make sure they don’t “invade anyone’s reasonable expectations of privacy.”

The drones tested in May were equipped with sensors designed to analyze the structural integrity of the “nation’s linear infrastructure,” such as natural gas and oil pipelines and electrical lines, according to a press release following the May tests by American Aerospace.

“Virginia offers an incredible environment to conduct the flight testing needed to develop safe and effective Beyond Line of Sight UAS for the energy sector,” said AATI CEO David Yoel in the May release.

AATI is a California-based company working to develop drone sensor technologies in order to monitor the quality of pipelines across the country, according to the company’s website.

FACES gets $13,000 in grants from businesses