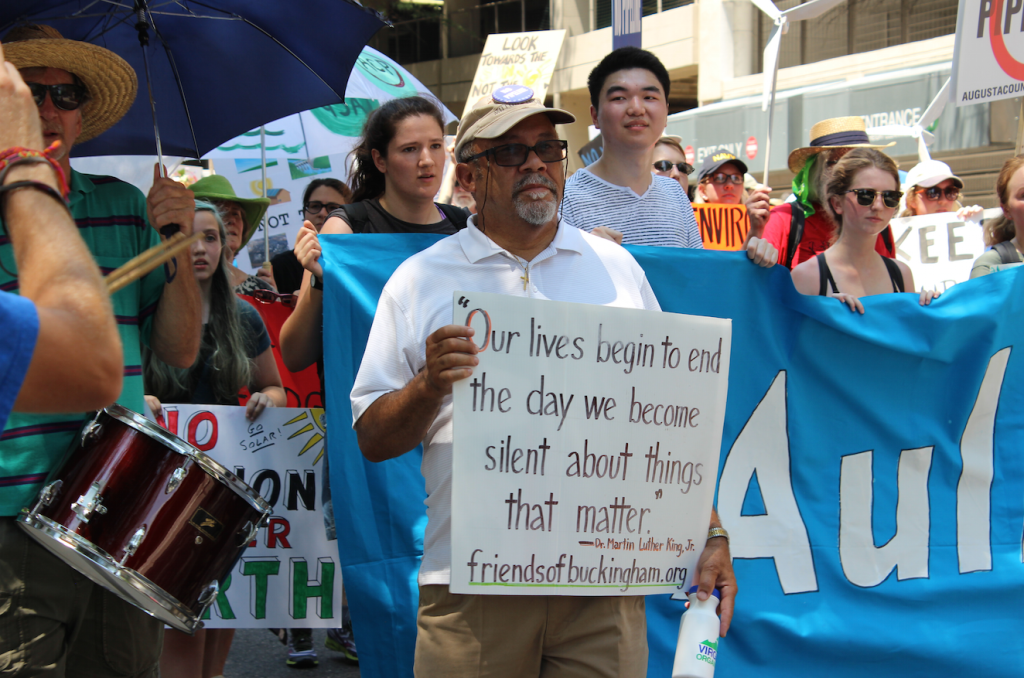 Six hundred activists marched to Gov. Terry McAuliffe’s house Saturday, demanding that he “put the welfare of people ahead of the interests of polluters. “

Waving banners that included “McAuliffe: Climate Justice Can’t Wait,” the protesters demanded that the governor become a full-time champion of renewable energy solutions and stop supporting fossil fuels that harm communities and worsen global warming, according to a press release from the Chesapeake Climate Action Network.

Dominion — the lead partner of the project — is proposing an over 53,000 horsepower gas-fired compressor station in Buckingham between Shelton Store and Union Hill roads. The station, which would be located along Route 56, would be in the vicinity of Union Hill and Union Grove Baptist churches, where the Rev. Paul Wilson is pastor.

“Our churches and 75 percent of our membership make up the ground-zero zone of the proposed compressor station for the Atlantic Coast Pipeline,” Wilson said in the release. “Dominion’s real message to us is that 200-plus lives don’t matter.”

According to the release, “the ‘March on the Mansion’ brought together people from Norfolk to Northern Virginia to the New River Valley who face first-hand effects from dirty energy policies that Gov. McAuliffe supports. Farmers whose land is threatened by the proposed Atlantic Coast Pipeline and Mountain Valley Pipeline marched shoulder-to-shoulder with Virginians whose drinking water is polluted by coal ash and coastal residents whose homes are being flooded by rising seas.”

Wilson spoke during the rally.

The release stated that over 60 landowner, social justice, faith, student, riverkeeper and climate groups organized and endorsed the rally, “demonstrating the growing movement across Virginia calling for swift and serious action to transition to sustainable and just energy. The groups will continue working together to challenge the stranglehold that polluting companies have over energy policy in Richmond.”