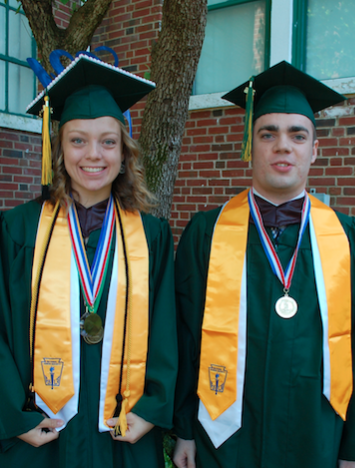 JORDAN MILES | HERALD Melissa Wright is the valedictorian of the Buckingham County High School Class of 2016. Henry Jones is the salutatorian.

Melissa Wright is the valedictorian of the Buckingham County High School Class of 2016. Wright, the daughter of Bobby and Sandra Wright, will receive her associate’s degree from Southside Virginia Community College.

Wright played junior varsity softball her eighth-grade year and varsity softball all four years of high school. She earned All-Conference and All-District her junior year. She has been a member of the Student Council Association and Future Business Leaders of America for four years. In her junior year, she was inducted into both National Honor Society and BETA club where she held the position of President.

In the fall, she will attend Longwood University, where she plans to major in accounting.

Henry Jones, the salutatorian is the son of Mary and William Jones. He was born in Birmingham, England, and moved to Buckingham County when he was 8 years old. Upon graduating, he will receive his associates degree from the Southside Virginia Community College Governor’s School program.

He has participated in Scholastic Bowl for all four years of high school. Jones ran track for a year and is a member of the National Honor Society. He will attend Brigham Young University in Provo, Utah, where he plans to major in computer science.