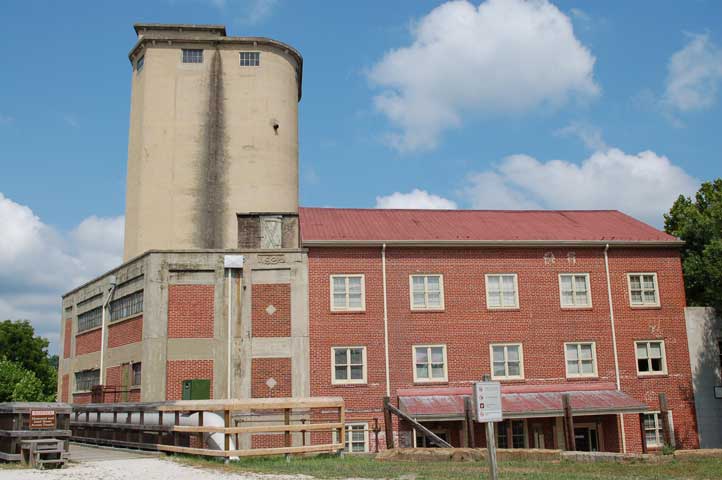 Established in 1838, Farmville Mills was taken over by the Bliss family in 1889. The 100-foot grain elevator was built in 1921 while Thomas L. Bliss (1886-1923) was still active in the business. It now stands as a silent memorial to his untimely death, due to World War I gassing, which left a void that was ultimately filled by his two brothers.

The closest Farmville ever came to a permanent World War I memorial honoring our fallen heroes came in 1925, when the State Board on the Distribution of War Trophies notified the town that they could have a captured German field piece. All they had to do was pay the cost of getting it to Farmville. Town council agreed to this and published the following statement: “The German field piece will be placed at the intersection of High, Oak and Appomattox Streets on Armistice Day, as a memorial to the valor of the boys, who fought, bled and made the supreme sacrifice in defense of their country during the late war. The street will be widened at this point about 10 feet, and the trophy set in a grass plot 8×18 feet, which will be surrounded by a concrete curb.”

JIMMY HURT
This captured cannon, the only permanent World War I memorial in Farmville, was ironically donated to a World War II scrap metal drive. From 1925-35 it was on display at the intersection of High, Oak and Appomattox streets. Since this was at that time the busy Lynchburg Road, the cannon was deemed a safety hazard and removed to Grove Street Park.

The Jack Garland Post was given the honor of organizing the dedication of the cannon. An Armistice Day parade, but much bigger than the one in 1921, was planned. Once again, the parade would start on North Main Street, but this time it would march right by the Confederate Monument, all the way to the official World War I memorial. This was treated as a very big deal in Farmville and all the businesses agreed to close from 3-5 p.m. so that everyone could attend the parade and dedication.

Thus, on November 11, 1925, a formal ceremony took place at the intersection of High, Oak and Appomattox streets, where the cannon was dedicated to the memory of our fallen heroes. This busy intersection, which had beat out Grove Street Park, the courthouse green and the Weyanoke Hotel, turned out not to be the best location for the cannon. At that time Third Street dead-ended at the Train Station, so the road past the cannon was called the Lynchburg Road. By 1932 the cannon began to come under severe criticism as a nuisance.

Almost every Halloween the girls from the Normal School painted the cannon some bright color. By 1935, under the guise that it was a traffic hazard on the busy Lynchburg Road, the cannon was removed to Grove Street Park. There it remained until donated to one of the many scrap metal drives during World War II. (Contrary to popular belief, this cannon did not come from either the Liberty Loan Trophy Train, which stopped in Farmville Oct. 17, 1918, or the Carter Glass Trophy Train, which stopped on April 23, 1919.)

On Nov. 11, 1926, the Jack Garland Post organized another Armistice Day event — the planting of elm trees on the north side of the site of the future Southside Community Hospital (1927). They did a terrific job of setting up this event, the parade leading to the site was a half-mile long and a large crowd was in attendance at the dedication of the trees. Once again the parade began on North Main Street and marched right past the Confederate Monument, right past the cannon, all the way to the hospital site. Today there remains only one large tree behind the hospital, and it is in a very precarious location. No one knows if it was one of the elm trees planted in 1926, but it is large enough to be 90 years old.

There is an anonymous plaque at Hampden-Sydney that lists the names of 14 alumni, which you might conclude is intended to be a World War I memorial. Since the plaque is mounted on Memorial Gate, which was built in 1921 specifically to honor Hampden-Sydney alumni who died in World War I, you would be correct.

Among the 14 names on this plaque are two names — Finney Kernodle and Francis Allen — who are on our list of 31.

Phineas “Finney” Eggleston Kernodle (1896-1918; H-SC 1918), son of Thomas Jefferson Kernodle (1857-1929), of Hampden-Sydney, joined the Farmville Guard, but later transferred to Company I, First Headquarters Regiment, where he became a member of the military police at Camp Green in Charlotte, NC. He died of appendicitis in the Base Hospital on March 25, 1918. He is buried in the College Church Cemetery at Hampden-Sydney. The F4 tornado of 1935 destroyed his parent’s headstones but spared his, which bears the inscription: “Our Little Soldier Boy.” Francis Anderson Allen (1898-1918; H-SC 1920), son of Frank E. Allen (1859-1941) of the Douglas neighborhood, died of the flu at H-SC on Oct. 18, 1918. He was a junior at H-SC and a member of the Student Army Training Corps there. He was buried with military honors at Douglas Church Cemetery.

On Sunday, Nov. 13, 1921, the Farmville Baptist Church unveiled a “tablet dedicated to the members of the Baptist church who served their country during the late war.” The American Legion was in charge of the dedication, and the Farmville Silver Band and the Farmville Guard were present at the public ceremony. (Of our 31 local heroes, three — Thomas Osborne, Millard Smith and John Webster, each KIA in France in 1918 — were memorialized on that tablet, which still hangs in the church. All three of these men remain in American military cemeteries in France.)

There are two memorial stones on the lawn in front of the Prince Edward Courthouse honoring the fallen heroes of World War II, Korea, Vietnam and Iraq. But you will find no mention of World War I. Why is this?

Of the counties that adjoin Prince Edward — Appomattox (13), Buckingham (15), Cumberland, Amelia, Nottoway, Lunenberg and Charlotte — only two have World War I memorials that actually list their fallen heroes. The number of fallen heroes listed is shown in parentheses. It is possible that our list of 31 local heroes, whose names were gleaned from old 1918-23 Farmville Heralds, includes a few from adjoining counties.

In checking to make sure that none of our 31 names were duplicated on the Appomattox or Buckingham memorials, we found the list of names on those memorials incomplete.

For example, Buckingham left off the name of Corp. Kirby Smith Selden (1890-1918), who was killed in action in France on Oct. 5, 1918. Selden, nephew of the famous Gen. E. Kirby Smith, was buried with full military honors in Arlington National Cemetery.

On Oct. 30, 1934, the Jack Garland Post moved to the second floor of the Capps Building, having been without a regular meeting place for the preceding 10 years. (The old Capps Building, recently restored, is located on Main Street, beside the site of the old State Theater, which collapsed during an ice storm on Feb. 11, 1994.)

At the end of World War II the American Legion began admitting veterans of that war to its membership.

Nevertheless, this war stimulated the creation of a new veterans organization, the Veterans of Foreign Wars (VFW). By 1946 there were two competing veterans organizations in Farmville: the American Legion Jack Garland Post and the VFW Thomas Hardy Graham Post (Lt. Thomas Hardy Graham (1917-1945), USN aviator, son of Samuel Lyle Graham III (1887-1971), died in a plane crash on Jan. 27, 1945, and was buried with full military honors in Westview.)

At some point the Jack Garland Post relocated on the Rice Road about one mile east of the Cedar Brook Restaurant, next to Briery Creek. At this location there was plenty of room for expansion, so they built one of the finest Class A go-cart tracks in the state and leased it to the Farmville Carting Club. The banked-oval track was hard-surfaced and equipped with lights so it could be open at night. It opened in November 1959 and had a concession stand run by the American Legion. (The American Legion is listed at this location in Hill’s Farmville City Directory for the years 1960-73, but does not appear at all in 1975-79.)

It is unclear why the Jack Garland Post went inactive, but it is back now and better than ever, just in time for the upcoming World War I Centennial (1917-2017) and American Legion Centennial (1919-2019). It meets once a month at the Farmville Train Station.