SEC’s journeyman division team of Brad Ashwell, Greg Ayers and Ashley Tuck earned the coveted Jimmy Gardner Award, named for a pioneering Virginia lineman and given to the top-placing rodeo team among members of the Virginia, Maryland & Delaware Association of Electric Cooperatives (VMDAEC). 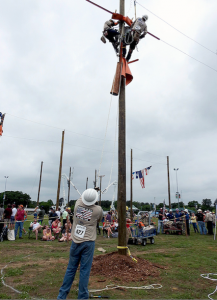 The award, given annually at the competition, factors in scores from five separate events that measure the wide range of skills used by electric utility linemen. Two additional SEC teams competed in the journeyman division alongside 150 other linemen from 14 electric utilities in six states. That included the team of Blake Poindexter, Will Southworth and Nick Chumney, along with Brandon Rust, Jason Hinebaugh and Edward Bethel. SEC apprentice lineman Trevor Duers earned second place out of 47 apprentices in the Cross Arm Relocation competition, and placed ninth overall.

Also representing SEC in the apprentice division were Stewart Whitmer, Frank Miskovic and Daniel Boney, who participated in five different events, including Hurt Man Rescue and Climbing Skills Demonstration. Held near the state fairgrounds in Doswell, the annual competition features a journeyman division of three-man teams and an individual apprentice division. Linemen in both divisions perform a variety of required skills atop 40-foot utility poles. Judges score the competitors on how quickly they complete each task correctly and safely.

Named for the gaff, or metal spikes that linemen attach to their boots to assist in climbing wooden utility poles, the regional event determines who will move on to the International Lineman’s Rodeo held every October in Bonner Springs, KS. “We’re extremely proud of our Gaff-n-Go champions and all our competing linemen,” said SEC President and CEO Jeff Edwards. “These are incredibly dedicated individuals who often work in the worst possible conditions to restore power to our members when outages occur. Line work requires mental toughness, in addition to physical strength. Working around energized lines can be extremely dangerous, so linemen must be able to concentrate on the task, even when confronted with rain, ice, snow, frigid or stifling temperatures. Despite all of those challenges, SEC’s linemen have an outstanding safety record.”