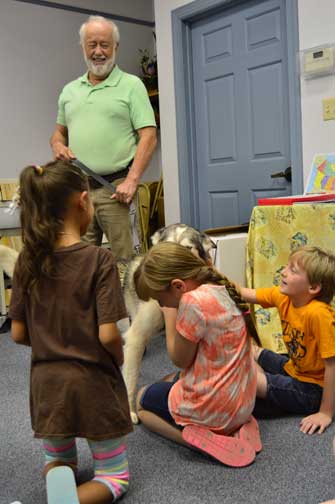 The children gathered in Cumberland’s public library Monday evening didn’t need to risk frostbite to meet a professional Alaskan dog sledder and a furry member of his team.

Elmer Watts, a Cumberland native, brought his retired sled dog, Strider, and experiences for the second week of the library’s summer reading program.

Inspired by the duo, the children took to makeshift toboggans crafted by longtime library volunteer Pat Adams. The group took turns pulling one another across the grassy area behind the library, competing with the timer, pretending to race across an icy tundra thousands of miles away. Except the barks of sled dogs were replaced by the laughs of children.

The world of pretend created by one of the library’s summer events closely related to Program Director Robin Sapp’s explanation of why the library made the effort to promote reading during the six-week summer program. 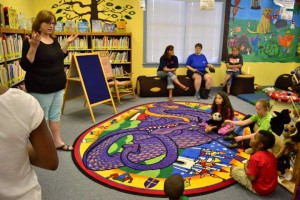 “Reading opens doors to anywhere you want to go. You can grab a book and go to another country with no cost, no visa, no passports and no money. To me, kids, their minds are still so formative. They don’t know what they want, they have to experience good things and I think through books and through meeting people, it’s not just books, but the whole experience of the library,” Sapp said. “I feel it’s important because it can open up the world to the reader. If you like to read, you know yourself and you learn so much, you just learn so much.”

Currently, the library has over 50 people registered and will continue to accept forms throughout the program. Those registered have the opportunity to win weekly prizes if they complete at least two hours of reading that week. The more hours they read, the more times their name is placed in the weekly drawing. They also have the opportunity to win door prizes at the Monday evening events.

All prizes were donated by over 40 area businesses in the form of items valued up to $50 and monetary donations up to $150; the library received approximately $2,000 worth of prizes.

“It’s awesome because I hear of other libraries who don’t have this support. They’re given very little gifts, if they even have incentives to give their children because it’s not in the budget,” said Sapp.

As one of the main organizers of the program, Sapp emphasized the library’s goal to generate interest in reading early in life. To Sapp, who previously worked as the literacy director of Nottoway’s library before joining Cumberland’s staff in February, the ability to read is instrumental in a child’s future success.

“If you can’t read well, you can’t accomplish the goals that you need,” said Sapp. “I met so many adults that could not read, and their life was so limited.”

She noted the adults typically found a way around their illiteracy through memorization and learning trade and mechanical skills. But today, she says, young people don’t have factories as a job option.

“You go to look for a job now, it says able to follow multiple directions, written communication — these things are mandatory for being successful,” said Sapp. “Let’s face it, unfortunately, Cumberland has a high poverty rate, and high poverty has been associated with children that don’t have good reading skills or have parents that don’t. So, if you can get somebody while they’re young and create that love, then hopefully it’ll break habits and chains that maybe wouldn’t be broken if they haven’t experienced books.”