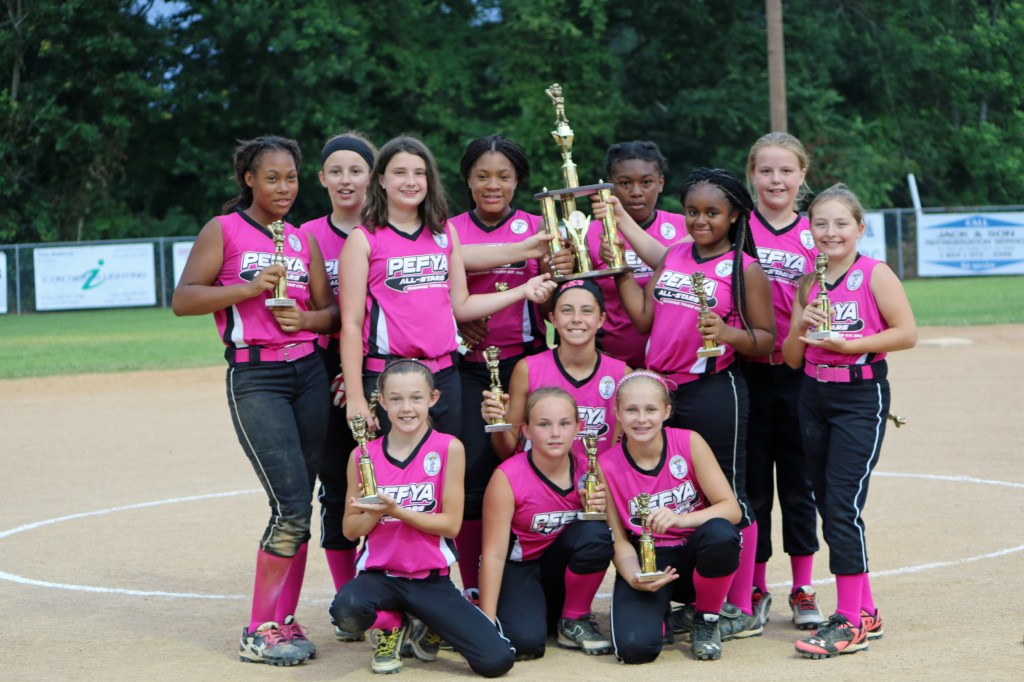 The Prince Edward-Farmville Youth Association’s Ponytails All-Star softball team capped off a dominant run in the Dixie Youth Ponytails X-Play District I Tournament by defeating the Lunenburg County All-Stars 16-1 in the championship Tuesday evening in Kenbridge.

The PEFYA squad will begin play in the Dixie Youth state tournament on July 15 at 5 p.m. in Goochland against the winner of the District III tournament.

The local girls went 5-0 in the District I tourney, outscoring opponents by the remarkable margin of 71-7.

The PEFYA Ponytails started play in the district tourney on Saturday when they defeated the Clarksville All-Stars 10-0. Later that day, PEFYA defeated the Dinwiddie County All-Stars 16-1.

Sunday brought the first meeting between the local girls and Lunenburg County, with a 14-0 final score to that contest. On Monday, Clarksville managed to put up five runs but still fell to PEFYA 15-5.

During the tournament, “the most we played was four innings,” Conwell said, as all of his team’s games ended early due to the mercy rule.

In the rematch with Lunenburg County on Tuesday, PEFYA went up 3-1 after the first inning, made it 13-1 after the second and 16-1 after the third. In the fourth, PEFYA batted, but coaches instructed them to get out to avoid running up the score any further.

The team featured a trio of girls in the circle during the tournament, including Kyla Edmonds, Alyson Lucas and Danner Allen.

“All three of them, they just pitched very well all weekend,” Conwell said.

On defense, “it wasn’t one person,” Conwell said, referring to team standouts for the tourney. “It was everybody making plays, and offensively, we all hit. … Offensively, it was a hitting clinic.”

PEFYA Softball Commissioner David Schmidt praised the squad, noting that “they are a dominant team. They’re a good hitting team and a good fielding team. This is our Angels team from last year, and they’re just coming into Ponytails, so they’ve got another year of Ponytails. And for them coming off and doing this in district is pretty good.”

Conwell noted that 10 of the 12 girls on the Ponytails team were part of the Angels team that won the state tournament last year and went to the Dixie Youth World Series, where they won two games.

“I thought that was impressive because some teams had like 10 teams to pull their all-stars from, and here we are, we barely have enough to make two teams,” Conwell said.

He estimated that nine to 10 of the girls have been playing together for three to four years.

As for why this Ponytails team is so dominant, Conwell said, “They’re coachable. They listen, they do what they’re told and they’re just a good group of girls, and they’re all friends. They’re not trying to out-do each other. They’re not selfish. That makes a huge difference.”