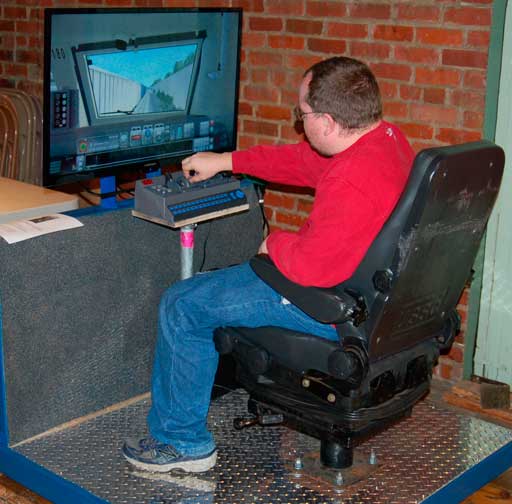 James Dunlap adjusts the speed control on the newly constructed train simulator at the Railroad Museum.

Member John DeMajo of The Richmond Railroad Museum has constructed a train simulator so all kids, young and old, can experience the thrill of driving a modern diesel/electric locomotive pulling an Amtrak passenger train.

DeMajo conceived this exhibit while reading that the Pennsylvania Railroad Museum had gotten a $147,000 grant to build a train simulator. Thinking that a working simulator could be constructed with a far more modest budget, DeMajo planned and built the train simulator as a donation to the museum.

The simulator is constructed with a real engineer’s seat bolted to “diamond plate” flooring as it would be in a real locomotive. A real locomotive control console takes operator input and relays it to a program in a computer. The computer program then sends appropriate sights and sounds to a large flat panel TV screen to simulate movement of an actual train.

Museum member Chuck Breeden assisted with moving the assembly from the delivery truck into the building. The simulator is located in the baggage room at the museum. Participants can select a variety of trips that can be undertaken with this simulator.

The Richmond Railroad Museum is in the former Southern Railway passenger station located at 102 Hull St. at the foot of Mayo’s Bridge.

Admission to the museum is free, but donations are gratefully accepted.