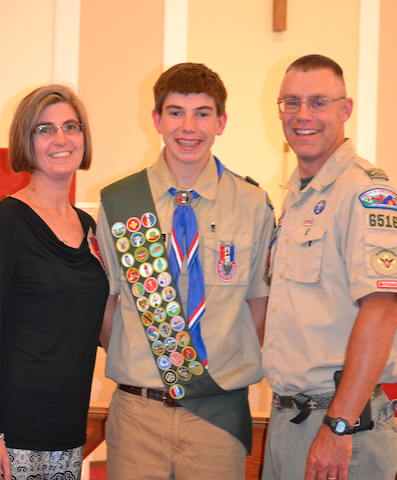 Eagle Scout Andrew Nicholas Murphy received his Silver Palm at a recent Court of Honor for Boy Scout Troop 6516. The Silver Palm is the highest rank in Boys Scouts.

In order to earn Palms, an Eagle Scout, must complete the following requirements: Be active in his troop and patrol for at least three months after becoming an Eagle Scout or after the award of the last Palm; demonstrate Scout spirit by living the Scout Oath and Scout Law in everyday life; make a satisfactory effort to develop and demonstrate leadership ability; earn five additional merit badges beyond those required for Eagle or the last Palm; participate in a Scoutmaster conference; and successfully complete a board of review.

The Bronze Palm represents five additional merit badges beyond those required for Eagle, the Gold Palm 10, and the Silver Palm 15. Murphy is the first scout in the troop’s 80-year history to complete the requirements for all three Palms.