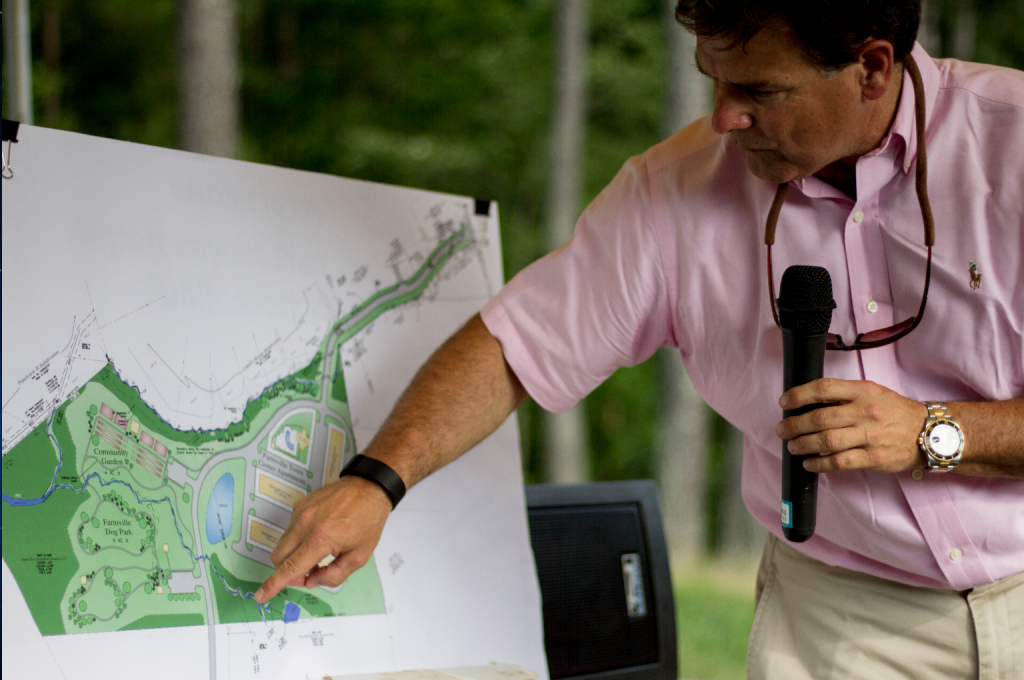 Russell Harper, a developer with Farmville Associates LLC, explains his plans for a proposed 120-unit apartment complex during a community meeting Friday. (Photo by Carson Reeher)

Town residents, including many who live in the Greens South subdivision, expressed contempt for a proposed 120-unit apartment complex during a community meeting on Friday at the cul de sac on Cabell’s Court.

Real estate developer Russell Harper, of Farmville Associates LLC — the firm seeking a conditional use permit for the apartments — and Greg Cole, who represents Ward A on the Farmville Town Council, invited members of the community to share concerns and ask questions.

About 30 people attended the meeting.

The meeting’s environment was charged with high emotions and hostile questions from the audience to Harper.

If approved, the apartments would be constructed between the Greens South subdivision and Walmart.

“We think there’s a real need in this town for market-grade apartments,” Harper said during his presentation.

The property is zoned Business B4, making it eligible for apartments. However, the town council has to approve the conditional use permit before Farmville Associates can proceed with the project.

This meeting’s purpose was to discuss how the apartments would affect Greens South residents and to help set conditions for the conditional use permit “to eliminate things like lighting and noise,” said Cole.

Harper is proposing to add two entrances to a planned 120-unit apartment complex on South Main Street, in addition to donating 10 acres of property behind the complex to the town for community use. According to a conceptual drawing presented June 22 to Farmville Town Council members by Harper and Will Allen of Farmville Associates LLC, a new entrance/exit would be located south of the property, connecting to the Walmart parking lot. The second new proposed entrance would be accessible through the existing Tractor Supply parking lot.

The originally planned South Main Street entrance would cross property owned by Harper’s firm. The entrance to the Tractor Supply parking lot would intersect with the original entrance.

Residents expressed a range of concerns, from complete disapproval of the project to wanting small changes.

In an interview after the meeting, Mayor David Whitus said, “I think that it is not the town’s role to determine if the project is needed or not. That’s not what we in government do.”

“I think the location is a poor choice,” said Bill Thompson, a resident of Cabell’s Court. “Build it somewhere else,” he said.

Many people raised concerns that the project would devalue of properties in Greens South, however, Harper disagreed.

Other residents expressed frustration, noting they were not told the apartments were a possibility when they purchased their homes.

“When I bought a house, I would (do) research,” Harper responded.

During the meeting questions were raised regarding potentially changing the proximity of the apartments to the Greens South subdivision.

One person suggested that more space be allowed between the complex and the backyards of those who live on Cabell’s Court.

“We can definitely look at that,” Harper said.

Others stated that the apartments would draw students, similar to the Sunchase Apartments on East Third Street.

Harper argued the high cost of the apartments would likely keep students away. He said that a two-bedroom apartment in the complex would cost about $1,400 per month.

The apartment buildings will most likely be three stories, and about 30-feet tall, said Harper.

Many in attendance argued that Harper wouldn’t be able to find 120 young professionals who could afford the apartments’ rent.

Trent said, “(young professionals) would not want to live in Farmville even if they did make the salary and (want to) pay that rent because it’s a very boring place.”

“My only hope would be that they will take some of our concerns into account. Whether they will or not, I’m not sure that I have a lot of confidence in that,” said Thompson.

“We had some good suggestions,” Cole said. “We had some people that are totally against the complex (and) a little bit of emotions,” said Cole.

“Overall, I think we got some real good suggestions that the developer can take back and see if he can modify and address some of those concerns.”