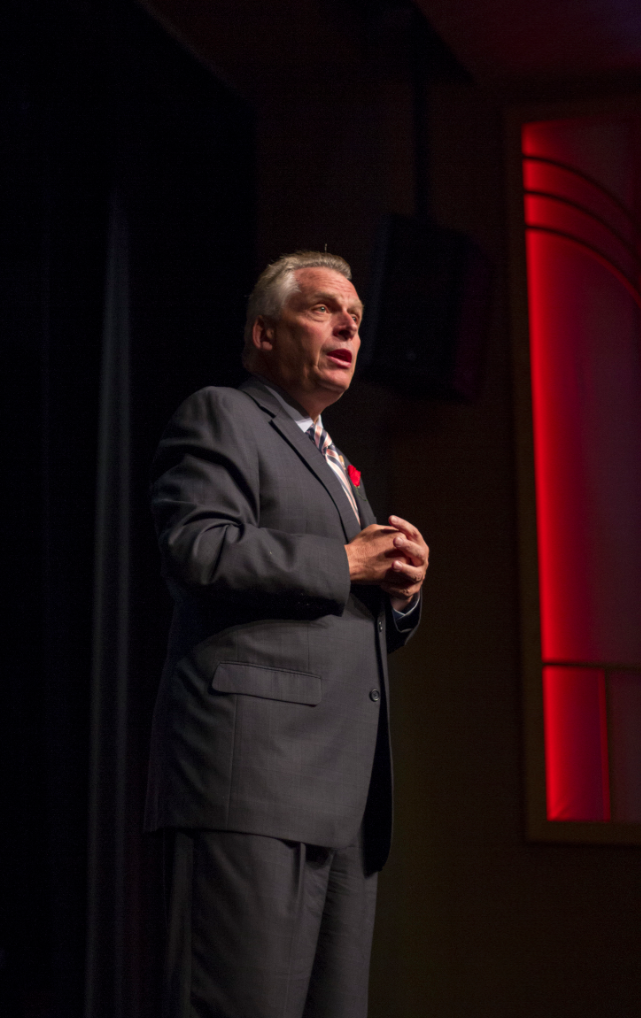 “I support the new pipeline,” he told rising high school seniors during Virginia Girls State, held last week at Longwood University. “I’ve always said, ‘If we’re going to do it, let’s do it.’”

His repeat endorsement of of the pipeline came in response to a Q&A session.

One girl asked McAuliffe how he felt about the pipeline, emphasizing the general lack of expressed support from citizens in the region.

McAuliffe said the project was not a state project, but rather a federal one. He said he did not have a say in the project.

“It is a federal issue. It’s not a state issue. Contrary to what you may read in the paper everyday,” he said.

“We have probably close to 300 pipelines already (in Virginia),” McAuliffe said, noting that “we’re not fracking here, we’re just transporting.”

Dominion is the lead partner of the ACP, which, if approved by federal regulators, would transport natural gas from West Virginia to North Carolina, spanning Virginia.

The 42-inch pipeline would travel through Buckingham, Cumberland and Prince Edward counties, if approved.

“The (ACP) pipeline needs to be done in a way that protects our assets, our historical assets, but we have 250, 300, already underground today in the commonwealth of Virginia,” McAuliffe said.

He said that the pipeline is different from the already existing pipelines, because the ACP will be state-of-the-art and environmentally protective.

“It will bring natural gas into Virginia. We will now have some of the lowest energy costs in the United States of America,” McAuliffe said.

McAuliffe argued that, the only way the U.S. can bring jobs back to Southside communities is with manufacturing and advanced manufacturing.

McAuliffe said he wants to see an increase in renewable energy in the state.

“I’m a huge advocate for renewables. I put them in my legislature every year. (The) Republican legislature never appropriates funds,” McAuliffe said. “I want onshore wind, I want solar panels. I think it’s the energy of the future.”

“Google, Microsoft and Amazon will only come to a state where you give them part of their energy use as renewable,” said McAuliffe. He said he would like to see those companies come to Virginia and bring jobs.

McAuliffe emphasized that he wanted to create more jobs in the state. He encouraged the girls to “think big,” not to be afraid to fail and “to take chances.”

McAuliffe said that there are 30,000 jobs in the cyber sector in Virginia. Starting pay for those jobs is about $88,000, he said.

McAuliffe said that he would like to see high school curricula redesigned so that students are going into the workforce to learn, rather than staying in classrooms.

The governor encouraged the students to enter a career where they can change someone’s life.

The governor attends Virginia Girls and Boys State each year. The programs are sponsored by the American Legion and take place each summer for high school students who have just finished their junior year.

Girls State has been held at Longwood University for 42 years.