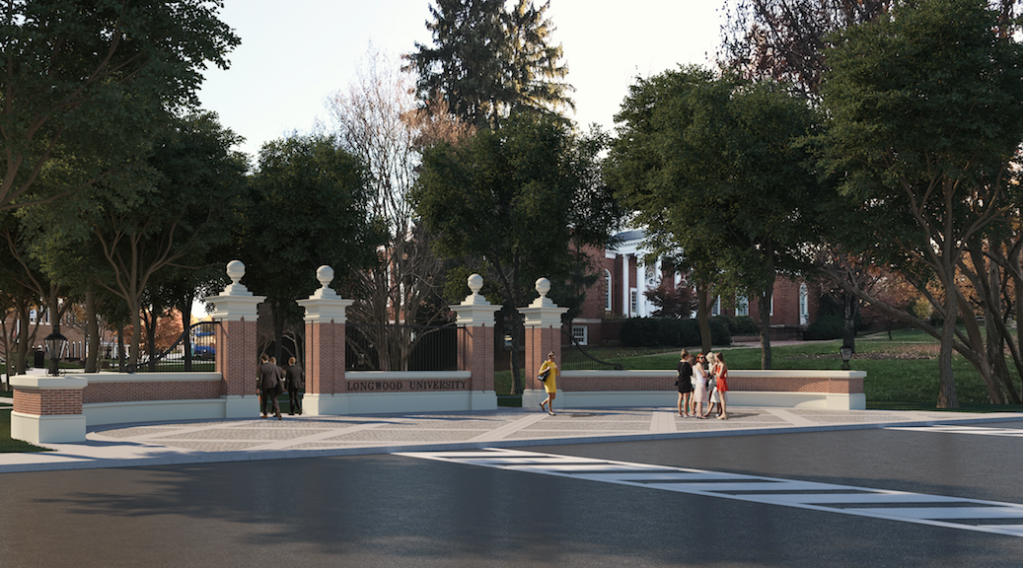 Aesthetic changes are coming to Longwood University in the space where High Street and Brock Commons meet.

What is now a fenced-off area will be home to an “iconic gateway” come September, according to Longwood’s Director of Communications and Media Relations Matt McWilliams.

This construction is a part of Longwood University’s recently announced Master Plan. The plan, which was created under the guidance of Cooper Robertson, an architect and urban planner based in New York, aims to develop the campus and accommodate for up to 6,000 students by the year 2025, university officials say.

“The intersection of Brock Commons and High Street is full of potential,” McWilliams said.

Longwood will also add a low brick wall in a semicircle at High Street.

“The scale of the gateway is modest, with low seat walls on each side of two classical portals,” said University Architect Tom Frisbie-Fulton. “It is a landscape structure that quietly punctuates the line of buildings along High Street and provides an organizing entry point to campus.”

According to Frisbie-Fulton, the wall is meant to provide a traditional collegiate feel.

“One of the big ideas is to try to make something out of it that is a bit more recognizable and important,” said John Kirk, a member of the Cooper Robertson consultation team. “It wants to be the kind of place where mom and dad take the photograph with their freshman son or daughter and then again four years later in a cap and gown. The minute you see that space, you say, ‘That’s Longwood.’”

According to Longwood, the elegance of north campus is representative of Longwood’s academic and architectural soul, and this new entrance will help to emphasize that.

Along with the entrance, the master plan calls for walkways to be built connecting north campus and more green space added with trees and hedgerows.

“(The entrance) symbolically marks the Longwood student’s passage to a place of higher learning and thinking, and provides a ceremonial portal at graduation,” Frisbie-Fulton said. 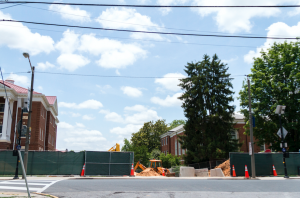 CARSON REEHER | HERALD
The area along High Street that’s fenced off for construction will feature a curved brick wall that will serve as an iconic entryway to campus. According to Longwood’s Master Plan, the entrance is meant to be memorable and provide a traditional collegiate feel.

In addition to the entryway slated for completion in September, many other projects are underway while students are off for summer, including the construction of two new residence halls between Arc Hall and Greenwood Library, a Student Success Center on Redford Street, the Upchurch University Center in the heart of campus and a new facade on Willett Hall, according to McWilliams.

Maintenance work is also being performed on The Colonnades in front of Tabb, and is set for completion in August.

McWilliams said, “Much of this work will be done over the summer to minimize impact on campus life and academic study.”

“Longwood and Farmville are moving together toward a common goal: a thriving, beautiful campus in the heart of one of America’s great college towns,” said McWilliams. “With several construction projects underway both at Longwood and downtown, we realize there will be some noise and other inconvenience associated with that work, and appreciate everyone’s patience as we work to build the strength and character of campus.”

Visit www.placematters.longwood.edu to learn more about the construction projects, including the new High Street entrance.