Growth on the diamond 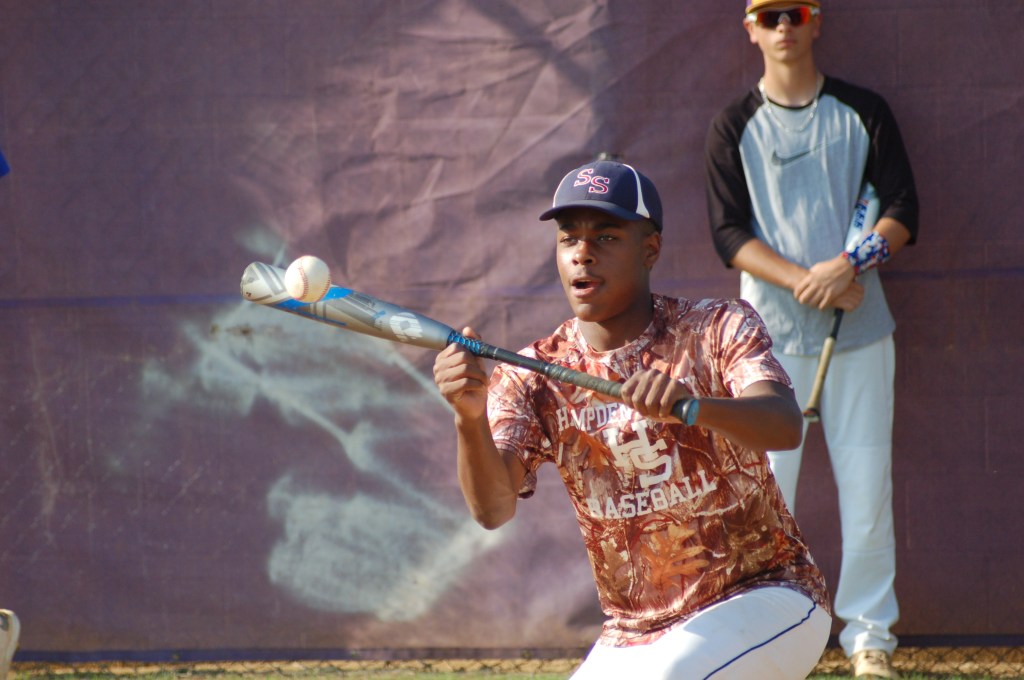 The first Prince Edward-Farmville Area Summer Baseball Camp was a success, aiding in the development of young players from several counties, including Prince Edward, Cumberland and Charlotte.

“We had a bigger turnout than what I had anticipated,” said Prince Edward County High School (PECHS) Assistant Varsity Baseball Coach and Camp Organizer Brandon Kenny on Friday. “I think Tuesday we had 17, today we probably have 15, I think one day we had 18, so it’s been good.”

“Coach Kinne came out and gave them a good hitting talk, just fundamentals,” Kenny said. “We can tell them stuff all we want to, but when you hear it from a college coach, it kind of resonates a little bit more, so just thankful that he was able to come out.”

The experience proved positive for Kinne, who said, “I think we got more kids than we thought for the first time out, and trying to just put energy back into baseball for this age group in this community is a good thing.”

The camp featured players ranging from rising seventh-graders to a rising senior, but it was dominated largely by rising freshmen and sophomores.

“I think just the overall goal of the camp is just harping on the fundamentals for kids who are interested in playing at the middle school and high school levels, who want to be good players at (those) level(s)…” Kenny said. “That’s kind of what we tried to hit on each day.” 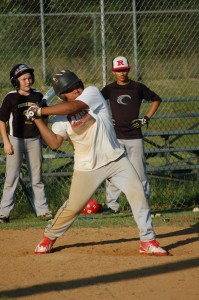 TITUS MOHLER | HERALD
Tya Johnson prepares to swing at the oncoming pitch as Caleb Camp, left, and Evan Maliangos look on in the background during the Prince Edward-Farmville Area Summer Baseball Camp.

Fourteen-year-old Jason Cooke, who played for Cumberland County High School’s junior varsity baseball team this year, noted that he benefited from two layers of instruction at the camp.

“I learned what a college coach will be looking for in a player from Mr. Kinne, and what a high school varsity coach wants from … Mr. Kenny,” he said. “Mr. Kinne helped me with batting and everything, because I needed to not step out on my swing, step toward the pitcher.”

Rising freshman Evan Maliangos, a player for Prince Edward County Middle School’s team, said that at the camp, he was “just learning the techniques of fielding, grounding, hitting baseballs and sharing with other guys and learning from them and just appreciating what they’re doing for us right now.”

Fourteen-year-old Carson Gibbs, who played for Central Middle School in Charlotte County this year, made some gains at the camp, noting that “I got a lot of new baserunning skills and new stuff on my swing.”

Kenny said, “If you get one or two things from the camp, then you learned something, and I think it makes it worthwhile coming out.”

Kinne said he is willing to help at future editions of Kenny’s camp, adding that “hopefully it’ll grow and get more kids in each year, because there (are) some talented baseball players here. They’ve just got to be coached and willing to learn.”

Most of the campers this year were from Prince Edward County, and Kenny said, “Hopefully next year, we can get maybe more kids from other counties involved.”