Elite training on the hardwood 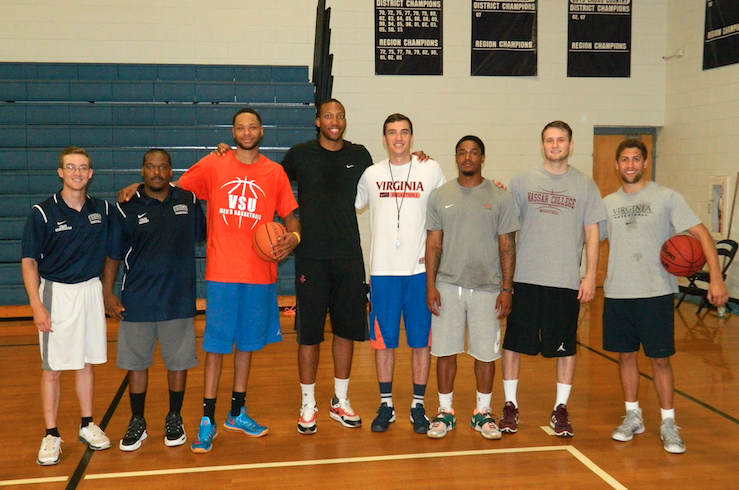 Thomas Rogers, of Richmond, hosted The Thomas Rogers Basketball Camp over the weekend at Central Middle School that gave young players in the area an idea of what hoops is like at the highest levels.

A group of 28 young people, including some from Cumberland County High School and Fuqua School, received instruction from players with professional and college experience during sessions on Saturday and Sunday.

The high-level players were friends and former teammates of Rogers, who played at Randolph-Henry High School, Fork Union Military Academy and the University of Virginia. The group included Akil Mitchell, who has been on the roster for the Houston Rockets and Brooklyn Nets and who currently plays overseas.

Rogers was pleased with how the camp went, serving a group that ranged from a rising third-grader to a rising senior.

“All the guys that I brought with me to work really enjoyed themselves, and I thought all the kids that we worked with were great,” he said. “They were really attentive, really open to learning and listening from us. … It’s definitely something that I’ll look to do again in the future and start to do this on an annual basis.”

During the camp, participants spent time at different stations, learning and being drilled on facets of the game. One station dealt with ball handling and one-on-one offense, another addressed passing and shooting fundamentals, a third taught finishing and scoring around the basket off of one-on-one moves and a fourth covered rebounding and post moves.

“I’m glad that I brought as many coaches as I did, because I really enjoyed kind of being able to, during the stations, kind of freelance,” Roger said. “I didn’t have my own station, so I kind of got to go and dip my foot in the water for all four of the stations and get a sense of how each kid works and how each coach coaches.”

Campers got to play in games in the afternoons, between which Rogers and his fellow coaches did skill breakdown sessions, helping show the young people things they could focus on to improve.

“A lot of teaching went on at the camp, and (Randolph-Henry) Coach (Jay) Graves mentioned that he takes his kids to another team camp in the summer, and he said it’s a whole lot of doing, doing, doing, doing, and not a lot of teaching,” Rogers said. “Looking back, I’m very proud of how much we focused on teaching the kids rather than just kind of running down the clock with them.”

Rogers plans to spend more time organizing next time, use pre-registration and hopes to involve more players from the other high schools in the area, not just Randolph-Henry, noting it would benefit the Statesmen “and the other kids in the area much more to kind of light that competitive fire and all of them to say, ‘Alright, you’re not going against one of your teammates today. You’re going against somebody else in the area that thinks that he’s better than you.’”