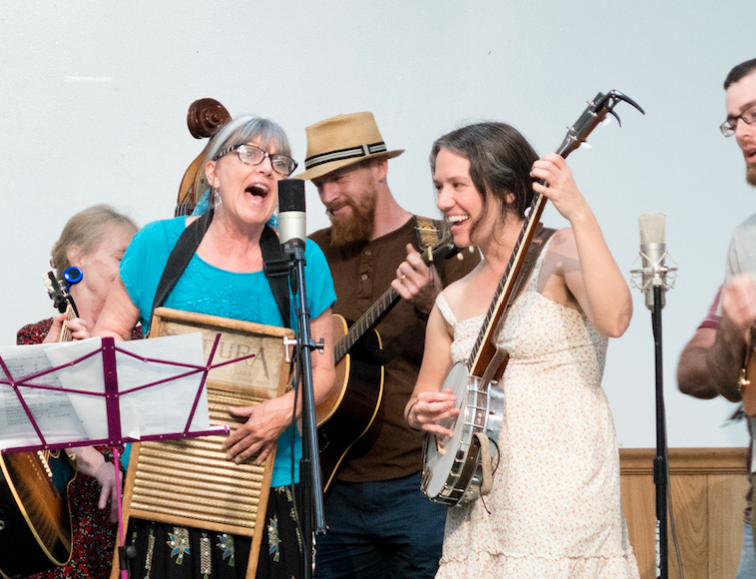 The Farmville Recreation Department hosted the Farm Use String Band on Friday for a concert and dance lessons.

The event was hosted by the Farmville Recreation Department and took place at the Fireman’s Sports Arena in Farmville.

The band “plays their own-high energy style of traditional, folk, dance music, staying true to the roots of traditional tunes heard for hundreds of years in living rooms and on back porches,” according to their website. “We provide two full sets of foot stompin’, good old fashioned fun.” 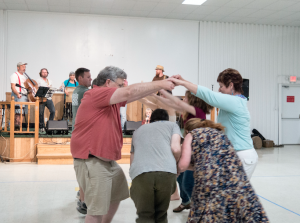 CARSON REEHER | HERALD
The band taught those in attendance how to perform a variety of dances, including circles, reels and flatfoots.

Their mission came to life Friday night in Farmville as it has in Pamplin for months now. The group teaches the audience how to perform a set of dances, including circles, reels, flatfoot and more. 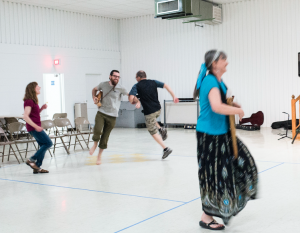 The band is made up of a group of 10 people: Tom Saxton, Chip Robinson, Betty Jo Taylor, Sandy Goodson, Mary Scanlon, Ken Swanson, Luca Bickerstaff, Jessie Boyle, Danny Smith and Chad Houk. They perform every first Saturday of the month at the Pamplin Depot in Pamplin. 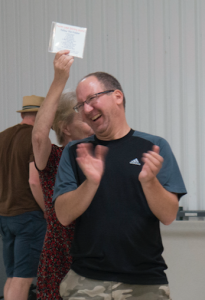 CARSON REEHER | HERALD
Gary Mairoano was chosen by the group as the best dancer for the contest.

Two audience members, Ricky Doyle and Sarah Hackney, drove all the way from Indianapolis, to watch the band perform.

Ricky Doyle’s daughter, Jessie, plays banjo and sings with the band. This was Doyle and Hackney’s first time watching the band perform. They were impressed with the performance, they said, and praised Jessie’s singing.

Another couple, Gary and Maureen Maiorano, have been coming to the band’s concerts for some time in Pamplin, and hope to attend more of the summer concerts in Farmville.

During the last song, audience members were invited to dance, and the best dancer was selected by the crowd.

Mary Scanlon, a member of the band, led the voting by asking the crowd to cheer for each dancer. The person who received the most cheers came in first. 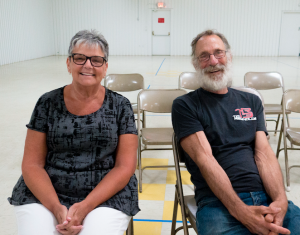 CARSON REEHER | HERALD
Phyllis Smith is the wife of Danny Smith, a fiddler in the band, and Peter Marks is the husband of Sandy Goodson, a member of the band.

Gary Maiorano was voted into first place for his passionate dancing, but turned down the prize, a Farm Use String Band CD. Instead, Scotty Thom, the second-place dancer, went home as a happy new owner of a Farm Use String Band CD. The band will perform in Farmville every other Friday. Their next performance is June 10 at the Fireman’s Sports Arena from 7-9 p.m. Admission is $5.

For more information on the band, visit www.farmusestringband.com, email farmusestringband@gmail.com or call (434) 248-5023. For information about their performances, contact Farmville Recreation Department at (434) 392-3737 or e-mail cbolt@farmvilleva.com.