Celebrating Jim Ryan through his art 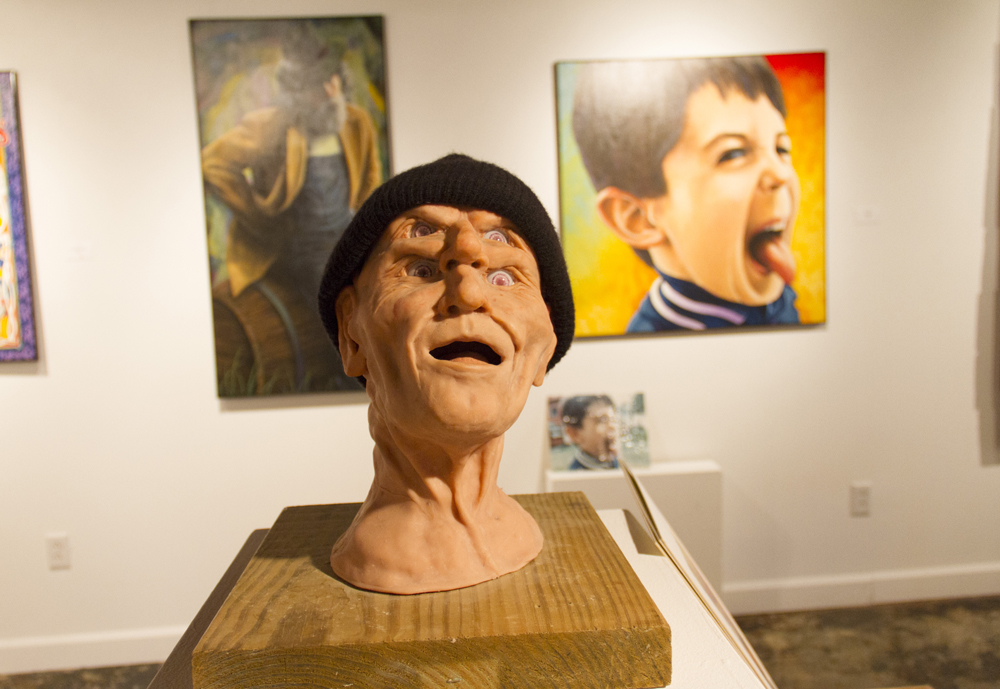 CARSON REEHER | HERALD “Ol’ Four Eyes” is one of Jim Ryan’s pieces in the J Fergeson Gallery, as a part of “Jim Ryan: A Retrospective” show.

“Jim Ryan: A Retrospective” has opened to the community. The show opened Friday, June 3, at the J Fergeson Gallery, located on Main Street in downtown Farmville.

It features work created by the late Jim Ryan. The pieces range from sculptures to paintings to prints. They are both large and small scale.

“The show itself was very, very nice. There was a very nice turnout and a lot of people said some very nice things,” said Mary Ann Ryan, Jim’s wife.

According to gallery owner Jarrod Fergeson, attendance at the event was strong, due in part to the other events on Main Street, such as LCVA’s Wine and Brew and Farmville Jaycees’ First Friday event. 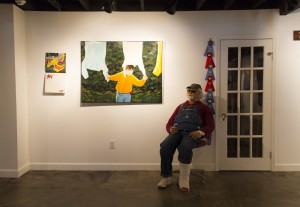 CARSON REEHER | HERALD
On display in the gallery is a calendar which features a photo of a cow Ryan produced for a “Cows on Parade” art fundraiser, a painting he produced and a life-size sculpture titled “Myke Lone,” which he made and carried with him to art fairs, such as the Heart of Virginia Festival.

Ryan was an artist who moved to Southside Virginia in 2003. He was based out of Meherrin.

Before coming to Virginia, he lived in New Jersey, where he worked as an experienced art director for ToysRUs for nearly three decades. It was upon moving to Virginia that he started exploring his talent with paint and canvas.

Among his accolades are award-winning billboard campaigns in Times Square and San Francisco. He has sculptures on permanent display in New York City and Osaka, Japan, said Fergeson.

Ryan was also an avid participant in the Heart of Virginia Festival and with Central Virginia Arts (CVA).

“Jim would wake up and pretty much paint what he felt like painting whether it was a man with four eyes, four ears and two noses or a still life of flowers,” Fergeson said.

“You’d never see him sitting around watching TV. He always had a paintbrush in his hand,” Mary Ann said.

“We worked with him a long time ago but did not show his work regularly. He’s a local artist, I like his work and I thought it would be nice to share his work,” said Fergeson.

Fergeson said the show was not meant to memorialize Ryan but rather to share his artwork with a new audience and celebrate him as an artist.

“People remember him and know him from Heart of Virginia Festival and CVA … I think it was nice to show his range of works from sweet to creepy,” said Ferguson.

Among the artworks available for purchase are a large-scale painting which declares “Support Virginia Farmers” and a sculpture titled “O’l Four eyes” that is a contrived head with four eyes, four ears and two noses. “Myke Lone,” a life-sized replica of Ryan that he made, is also on display in the gallery. The sculpture appears almost human in its accuracy.

“If you like his stuff you should be able to find something to take home, even if it’s a print,” he said.

Mary Ann decided to sell the pieces at the gallery to share her late husband’s work with those who appreciated it over the years.