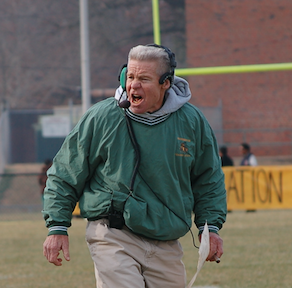 An earthquake in the Central Virginia world of high school football happened on May 20.

“It’s just been a great ride,” Gill said. “I just can’t believe it’s gone by that fast. I loved every minute of it. I always told kids I love coaching. You find a job that you love, you’ll never work a day of your life, and I never looked at coaching as a job. It was something that I loved doing. …”

Gill has been fighting cancer for three years now.

“It went in remission twice, and I got better, but I had to do treatments last year after football season, and the treatments did more damage than good,” he said.

Gill said he found out about a month ago that the cancer was back.

“I didn’t want to get out because of my health,” he said. “I was forced to by the doctors. They wanted me to take a year off (to) try to gain my strength back.”

After four decades of leading and developing young men, Gill noted that retirement has been a difficult transition.

“It was very emotional the first couple days knowing that I wouldn’t be going back coaching,” he said. “That’s what I’m used to. Kids — that’s what we put our emphasis on. We treat our kids very well. We love them, and we tell them we love them, and we get a lot out of our kids here. It’s just been a great run. I’m going to miss Friday nights. … I’m going to miss preparation time with the coaches, the competition, strategy. I don’t know how I’m going to handle this. I really don’t. I’m taking it one day at a time.”

He hopes to eventually make a return to the sideline.

“I hope I can get better and maybe come back in a year or two, maybe a year,” he said. “I don’t mind being an assistant coach.”

Expressing his appreciation for a supportive community, he said, “People here have just been wonderful. A lot of prayers, a lot of cards, very supportive, kept me going. The way that people treated me and the way they handled my illness just made me love this place even more, and that’s why I’ve never left.”

Gill has been either a head or assistant football coach for 40 years, and compiled a record of 158-85 during that time.

He served as a head coach at a school in North Carolina for three years, and then coached at Fork Union Military Academy in Virginia in the mid 1990s.

“I entertained thoughts of maybe becoming a college coach, and I wanted to get on a different level, and I really enjoyed that year at Fork Union, but I think the best move I ever made was coming to Buckingham,” he said.

The Knights had been struggling for a while when he first arrived, but he helped turn the tide over the course of his 20 years as head coach.

He led the Knights to a 131-83 record during that time, a run that included six James River District Championships and a state championship game appearance in 2002.

Buckingham has been 10-0 at home in playoff games under Gill; it has made the playoffs each of the last seven years and it went 10-2 in 2015.

Reflecting on Gill and his legacy at Buckingham, the school’s Director of Athletics, Dr. Jeffrey Garrett, said, “He was all about the kids, teaching them the game and relating it to life.”

Gill deflected praise for the team’s accomplishments to dedicated players and his coaching staff that he said was probably the best in Central Virginia.

Gill also underscored the tremendous support from the community.

“I love Friday nights in Buckingham,” he said. “We’re the only show in town. There’s nothing like small high school football, especially when you’re the only school in the county.”

“I’ve got a lot of great memories, a lot of good young men that contributed, and it’s just been fun,” Gill said.

“I just hate it’s over, but I’ll follow the team and just support them. And my heart will always be with the Knights.”